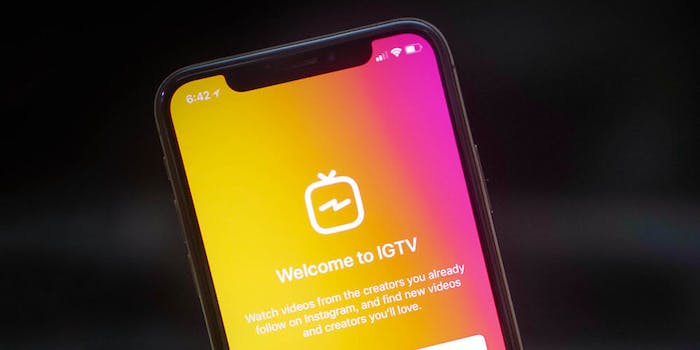 Instagram covers video costs for celebs who don’t get political

Users who discuss 'social issues, elections, or politics' are not eligible for the program.

Instagram has offered to cover production costs for celebrities who create videos for IGTV, so long as they avoid discussing politics.

The stipulation, found in an Instagram contract obtained by Bloomberg, specifically bars “content about social issues, elections, or politics.”

Celebrities who agree to the terms can receive thousands of dollars for production in exchange for creating a certain number of posts. Other rules state that the videos can only be promoted on Instagram and cannot be sponsored by third parties or include giveaways or sweepstakes.

Some deals have reportedly reached as high as $250,000 in exchange for 20 posts on IGTV.

“In the last few years we’ve offset small production costs for video creators on our platforms and have put certain guidelines in place,” the spokesperson said. “We believe there’s a fundamental difference between allowing political and issue-based content on our platform and funding it ourselves.”

The policy is a stark contrast from those over at Facebook, where the company’s Facebook Watch feature has partnerships with news organizations that solely cover politics.

Given the recent political woes on Facebook’s main platform, it’s possible the company is attempting to keep Instagram from facing the same backlash. In October, Facebook came under fire over its stance against fact-checking political ads. Twitter, on the other hand, recently made the decision to ban political ads altogether.

It remains uncertain whether any of Instagram’s policies will have a major effect on IGTV. Despite the social media site’s hope that it could compete with platforms like YouTube, IGTV has proven so far to be largely unpopular with users.