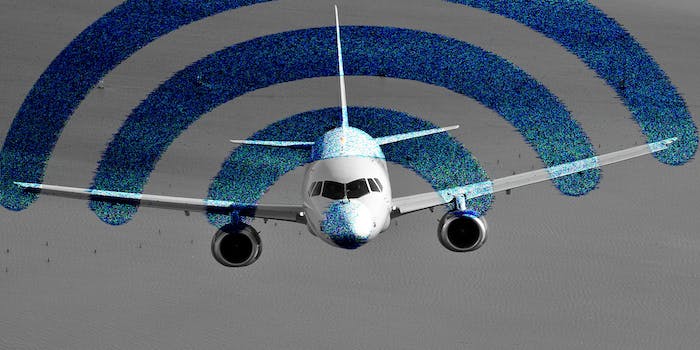 Just about everything connected to the Internet can be hacked.

Last week, a security consultant by the name of Ruben Santamarta claimed that inflight Wi-Fi systems in commercial planes could be hacked, and a plane’s avionics equipment could theoretically be infiltrated by nefarious parties. The hype over Santamarta’s allegations took Internet news by storm, naturally: The idea of cyber-terrorists hacking a plane’s Internet is going to attract attention (and pageviews).

The sensational claims were shocking, but didn’t tell the entire story. The rest unfolded at the Black Hat Conference, where Santamarta (a consultant with IOActive who has over 10 years of experience in the security industry) was speaking. What was revealed, and received far less attention than the initial claims, is that the threat of hacking via inflight Wi-Fi isn’t as real as it was made to appear, though the possibility exists.

During his appearance at the Black Hat Conference, Santamarta talked about the key factors that would prohibit most capable hackers from taking control of a commercial plane.

While Santamarta stated that none of his research gave any indications that avionics equipment could be hacked through the inflight Wi-Fi system, he did state that a hacker onboard a flight could jam satellite signals, if they had physical access to the inflight Wi-FI system, which isn’t easy to get.

Even if a hacker were able to access and hack the inflight Wi-Fi system, disrupting the satellite system wouldn’t cripple a modern plane. “We can disrupt satellite signals and modify the data channel but that doesn’t mean you can completely control the aircraft,” Santamarta remarked. “Aircraft have several ways to communicate with the ground, including VHF, and they don’t just rely on satellites.”

Santamarta also noted that his tests have only taken place in a lab, and not onboard an actual plane. We asked the makers of inflight Wi-Fi whether it was possible to hack their systems and inflict damage on a plane, but they all declined to comment.

An industry source did tell offer us the following explanation:

The safety and security of flights is of the first importance for the aviation industry. Inflight connectivity has been certified as safe by aviation authorities around the world, which subject every aspect of every aircraft to the most stringent testing. There is no doubt whatsoever that, once anything has been certified for use on an aircraft, it is safe and secure. From time to time, cyber security experts claim to be able hack into aircraft satcom systems, but these systems are designed and certified to be robust enough.

So is it possible for the inflight Wi-Fi systems in planes to be hacked? The simplest answer to that question, of course, is everything that is online can be hacked. We live in an era where security is more valuable than ever because of that.

However, the likelihood of an inflight Wi-FI system being hacked and effecting a flight in a negative way is extremely low. Until Santamarta’s hacks can be proven and reproduced on an actual plane by other security professionals in the industry, you can take your next flight with little to worry about.