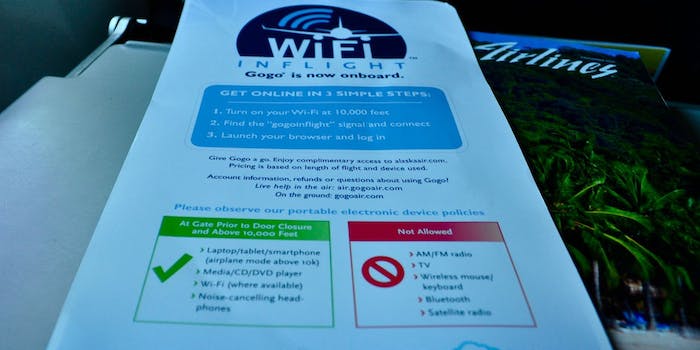 How Gogo is trying to solve this nagging in-flight issue.

If there’s anything worse than no Wi-Fi on an airplane, it’s slow Wi-Fi on a plane. But Gogo is trying to solve the latter issue, and with the Federal Aviation Administration approving its new technology for testing purposes, the company that provides Wi-Fi up in the sky says it’ll soon deliver Internet speeds up to 20 times faster than the average current service.

Gogo said that the FAA has allowed it to begin testing a new generation of satellite antennas, called 2Ku, that can go as fast as 70 Mbps. The company expects to begin commercial service of the new antennas later this year, and it will continue to be installed into 2016.

“This is a significant milestone for Gogo and a seminal event for in-flight Internet,” Gogo’s chief technology officer, Anand Chari, said in a statement. “We believe this will be the best performing technology for the global commercial aviation market bar none.  Clearing this regulatory hurdle brings us one step closer to enabling our airline partners and their passengers to enjoy the future of in-flight Internet.”

Gogo said seven airlines have signed up to either test the new equipment or upgrade their existing service. As for why Wi-Fi is oftentimes so slow, Vox had an explanation for it in April:

Gogo’s [Air-To-Ground] service sends up a signal from a network of 200 or so towers stationed in North America. As your plane passes over these towers, an antenna affixed to the bottom of it picks up a signal they send out, and other equipment converts it to a wifi network that covers the cabin.

The problem is that the data signal’s bandwidth — and thus the total amount of data that can be transmitted — is fixed, and quite small. The top speed is 3.1 megabits per second (Mbps), which by modern standards is extremely slow: it’s about a tenth as fast as what you get with a phone on Verizon or AT&T’s 4G networks. On about 500 planes, upgraded antennas allow Gogo to run a slightly faster service, called ATG4, but it still only has a top speed of 9.8 Mbps.

What makes both these services even slower is that this tiny bandwidth is getting divided among dozens or more users. It’s as if you’re sharing a single cellphone with a hundred or so people.

Sounds like those days of frustratingly looking at your laptop on a plane while nothing happens might be extinct sooner rather than later.