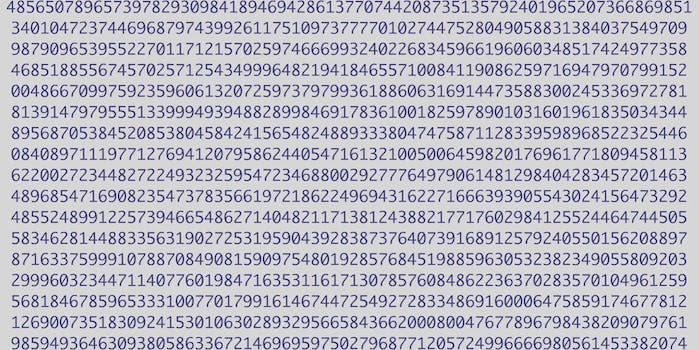 This number is illegal, and you could get in trouble just for having it

It's more than just a number.

In an era where information, computer code, and encryption are so valuable, some numbers can be illegal.

The right prime numbers can allow you to decrypt otherwise secret information—think classified information or trade secrets. That opens up a nasty Pandora’s Box when you consider what encryption protects on the Internet.

This video spotlights one particular number that can be used to break copyright systems on DVDs. It’s illegal for you to possess, publish, or use.

The copyright wars are one thing. But what about the new encryption wars?

Around the world, governments are now wrestling and debating the legal future of encryption, the technology used to encode data so that only authorized users can access it. This is how you can safely use your credit card online, for instance. It’s also used by criminals to avoid police.

Even if major Western governments begin to make strong encryption illegal—that’s what a new U.S. Senate bill effectively proposes—it’s not at all clear what that would mean for the future of the Internet.

Certain common computer code could become effectively illegal, or perhaps it will be illegal to not share certain crucial numbers with authorities that, like the DVD code, allow them special access to protected data.

This brings up two problems that many critics have with these anti-encryption efforts. First, they’re so vague at this point that no one is really sure what the practical effects will be on the real world. Second, they’re so broad they may end up having a huge range of unintended consequences.

Even your Web browser could become illegal if anti-encryption legislation became law, Julian Sanchez of the Cato Institute argues, because modern browsers use strong encryption—advanced math and big numbers—to protect your data.

Time to break out the calculator, outlaw.

Clarification: It is unclear exactly what the consequences would be for possessing this number. While civil penalties are certainly possible, copyright circumvention is criminal under the Digital Millennium Copyright Act.