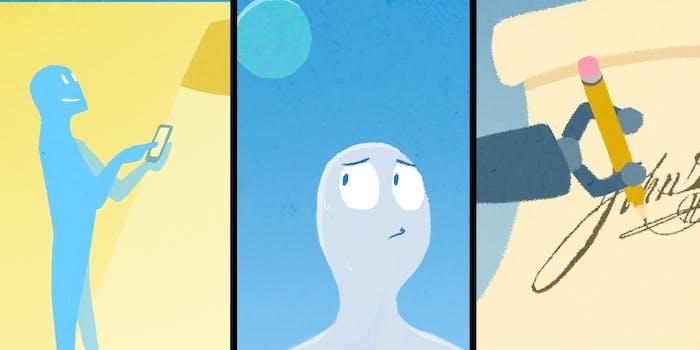 Important news you may have missed on Wednesday, Aug. 31.

A new study reveals data generated by ambient light sensors, which can be found in most smartphones and laptops, may betray users privacy far more than anyone previously imagined.

Donald Trump was ridiculed on both sides of the border today after accepting the invitation of Mexican President Enrique Peña Nieto. “Although you have been invited, know you are not welcome,” Former First Lady Margarita Zavala tweeted about Trump’s visit. It was a strange day for U.S.-Mexico relations, to say the least.

Researchers at a London university have developed a program that can analyze and mimic a person’s handwriting with surprising accuracy. It’s called “My Text In Your Handwriting” (presumably because they couldn’t think of anything longer) and while fascinating, it raises serious privacy and security concerns.

Mac-targeting malware is being spread through a corrupted version of Transmission, a popular BitTorrent client. Called OSX/Keydnap, the virus was created to steal passwords stored in OS X keychain and create a permanent backdoor to maintain access. We’ve provided some easy to follow instructions to remove the malware, if you have in fact been infected.

More than 68 million Dropbox account logins have leaked online. Dropbox says it does not believe any of the affected accounts have successfully been compromised as a result of the leak. Still, it seems like a good time to change your password—and enable two-factor authentication, if for some reason you hadn’t already.

SETI scientists discovered a signal that could be from an alien world roughly 94 light-years away. But don’t get too excited. As one researcher put it: Extraordinary claims require extraordinary evidence.

Let Google show you the Waze: The tech giant will launch its own rides-hailing service in the San Francisco area using Waze, the world’s largest community-based traffic and navigation app. If you’re planning to use the service, you may also be interested to know that it’s fairly simple for malicious hackers to track your whereabouts—here’s one Waze to stop them. (OK, I’ll stop now.)

“As memes go, it is achingly bad and exclusively used in the way of actual condescension,” writes Miles Klee, explaining why Condescending Wonka, which employs the likeness of the late Gene Wilder, is one of the worst memes of all time.

Pretty sure no one is.

Spotify is forcibly resetting a number of users’ passwords in response to data breaches of other websites. The music streaming service said the reset was purely a preventative security measure. –via Joseph Cox, Motherboard

Donald Trump reportedly raised his plan to build a border wall during his Mexico trip, but did not discuss who would pay for it. –via the New York Times

Forty-five percent of Americans say better border security and a path to citizenship should get equal priority. –via Pew Research Center

Syrian President Bashar al-Assad, a former doctor, is turning hospitals into death traps -via the Economist

Google hackers have figured out a way to use electricity leakage to flip computer bits from ones to zeros (or vise versa) and gain privileged access to a computer’s operating system. It’s actually crazier than it sounds. –via Andy Greenberg, Wired

Brazil’s president Dilma Rousseff has been “thrown out of office by the country’s corruption-tained senate after a gruelling impeachment trial that ends 13 years of Workers’ party rule.” -via Jonathan Watts, the Guardian