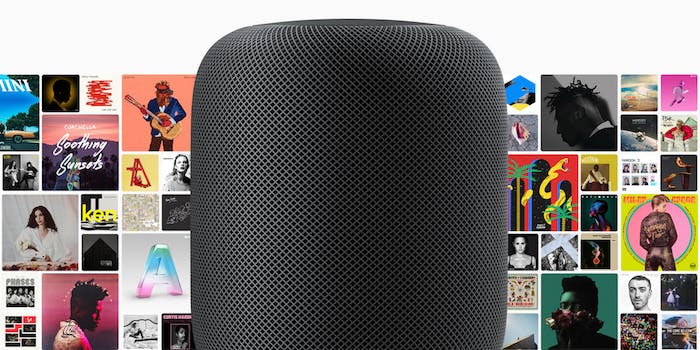 Apple’s HomePod smart speaker has gotten mixed reviews, with some critics lauding its audio prowess while dinging the new Apple product for being locked into Apple’s ecosystem. The Wirecutter called it the “best current speaker for Apple Music,” compared to competitors like Sonos One and the Google Home Max, and Wired says it “sounds amazing.”

Now, some are starting to debate those top-of-the-line music playing capabilities. After doing more research on Apple’s HomePod testing setup, reviewer David Pogue decided to recreate a head-to-head test of his own—a blind test, in fact—to ensure a level playing field and prevent any personal brand bias from creeping in.

To do this, Pogue hid four WiFi-connected speakers—the Sonos One, Google Home Max, HomePod, and Amazon Echo Plus, which range in price from $150 to $400—behind a curtain, and then invited five “panelists” to judge which was best. The panelists ranged from high schoolers to a professional violinist to one of Yahoo’s sound technicians. Pogue played five different songs, including Star Wars‘ “Imperial March” and “Helpless” from the musical Hamilton.

The results: The panelists had varying preferences, but none picked the HomePod as the speaker with the best overall audio quality. However, many did favor HomePod performance on particular songs that were tested. They also noted that their “favorite” speaker varied depending on the type of music played, though the differences were pretty minute—one panelist noted that all four speakers were “pretty on par.” The Amazon Echo Plus, the cheapest of those tested at $150, consistently ranked lowest in Pogue’s blind tests, but that’s not surprising given its size and price point. (And even still, it didn’t perform poorly.)

The takeaway here is that if you’re going to purchase a high-end connected speaker, all the major options on the market are pretty darn good. If you prefer a particular type of music, whether that be Top 40 pop songs or classical compositions, you can search out reviewers testing those types of music and see what they have to say about these speakers. The main differentiating factor for the HomePod continues to be its dependence on the Apple ecosystem. If you’re going to be playing music on Spotify, rather than Apple Music, you may be better served by a Sonos or Google Home Max.