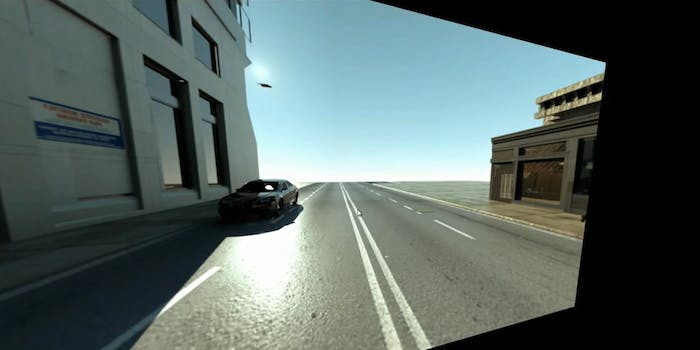 The ‘Star Trek’ holodeck could become a reality

The holodeck is real, finally. At the Siggraph 2014 graphics conference in Vancouver, B.C. a company called Otoy showed off a version of holographic technology that reportedly bears a striking resemblance to Star Trek‘s iconic fictional simulation room.

While companies like Oculus Rift, now owned by Facebook, are crafting headsets that we wear to view virtual reality, Otoy’s thinking bigger. The company has developed what it calls a “holographic video pipeline” that can display a virtual reality rendering in HTML5, mobile (OpenGL ES), and through VR devices like the Oculus Rift. Like the Lytro camera, the technique uses light field technology to capture and display three dimensions of data. The result is a sort of virtual video that can be navigated in three dimensions.

As explained by a press release from Otoy:

Each frame of video accurately simulates every ray of light in a given scene or environment and every interaction that each light ray has with the surfaces and materials therein. Every reflection, refraction, and absorption of that field of light is modeled as it would be in the real world.

The result is a video with true-to-life image quality that can be navigated and explored from any angle, otherwise known as holographic video.

The result really does have the effect of looking into a real, 3D space—or as Otoy puts it “a window into a virtual world.”