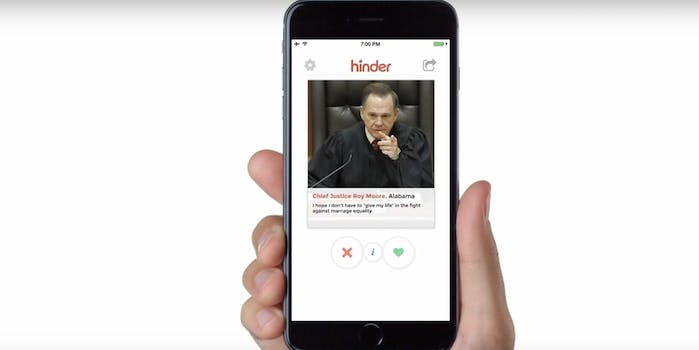 It's meant to help educate people about what elected officials think about reproductive health.

It’s not the opposite of Tinder, exactly, but you might not get to try it anyway.

Created by advocacy group Lady Parts Justice, Hinder is an app designed to help Tindering millennials make sense of where politicians stand on issues like Planned Parenthood, abortion, and LGBT rights. Instead of scoring you a date, swiping lets you learn what about your elected officials think about reproductive rights.

There’s just one problem—Hinder isn’t available in the App Store. When LPJ submitted it to Apple, it was denied, the Huffington Post reports. Apple reportedly cited Rule 14, which states that “Any App that is defamatory, offensive, mean-spirited, or likely to place the targeted individual or group in harm’s way will be rejected.”

The problem is, there’s a caveat to Rule 14: “Professional political satirists and humorists are exempt from the ban on offensive or mean-spirited commentary.” I’d say Winstead, and the long list of professional humorists and writers who support LPJ fall into that category.

Apple didn’t respond to a request for comment at press time.

The app clearly satirizes wildly popular dating app Tinder while taking comedic elements similar to The Daily Show‘s biting and insightful critique on politics and culture and mashing it into one great app. It takes just seconds to learn where your local leaders stand on different issues, and it also links you to news about them backing up the facts.

A video describing the application explains it as The Daily Show meets Facebook meets Tinder—”new technological innovation that gives YOU access to all the people who want access to YOU.”

In addition, it’s unclear how the app itself is defamatory or likely to place politicians in harm’s way—it cites news sources and doesn’t condone violence of any kind. If anything, it helps to educate people on whether or not the people they vote for believe in similar things.

“It’s like, we agree that it’s offensive that this many people get to say this many lies about reproductive health, about birth control, about women,” Winstead told the Huffington Post. “We’re basically stating facts in a satirical way, but you can fact-check the app.”

A number of people are speaking out after Apple’s refusal to include Hinder in the App Store, including comedian Sarah Silverman. UltraViolet, a women’s rights organization, has launched a petition to get Apple to approve Hinder.

I should really loo at what qualifies as a "researcher" @iTunes. Hey @tim_cook, maybe you could tell me… https://t.co/5htcbTUXJ4

Since you can’t download Hinder from the App Store, LPJ made it available as a Web app, and you can click the “x” or “heart” just like Tinder. There’s also an information button that links to news about the individuals and facts listed about the politicians and community leaders. And if you’re like me, you’ll find it much more interesting and educational than Tinder.