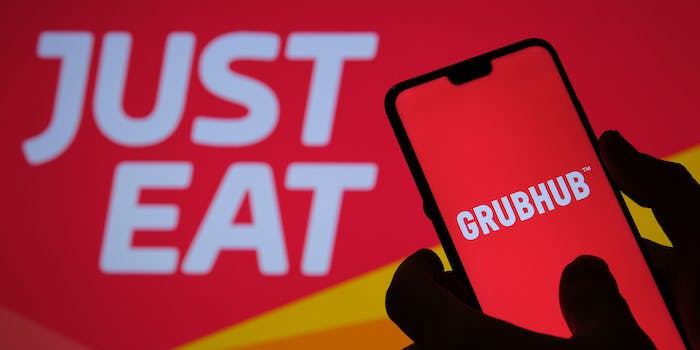 ‘Everything has gone to hell’: Grubhub crashes after offering all of New York City free lunch

'It has been over 3 hours and the restaurant person almost cried when I called.'

A Grubhub promo code crashed its app on Tuesday, with hundreds of customers unable to order and restaurants overwhelmed with tickets and cold food.

Grubhub announced last week that a “free lunch” would be hitting New York City, offering a $15 off promo code between 11am and 2pm on Tuesday, May 17.

However, when users tried the promo code, the app crashed, numerous users said.

“3min into @Grubhub free lunch promo, and the app is crashing,” one Twitter user wrote. “So much marketing and hype, just to fumble out the gate.”

Tanya Robinson said she tried to order from some familiar restaurants around 12:15, but was met with pop-ups declining her order.

“Twice, I chose meals from a restaurant and a message popped up saying deliveries could not be made,” she told the Daily Dot via Twitter DM. “Weird. So I checked my filters. Yep. It said delivery. Next, it told me that 3 other restaurants were either closed for the DAY or for a few hours.”

“Then I realized that these restaurants were shutting themselves down and GH was likely listing them based on submitted operation hours,” she said. “There are few food choices [around me] other than fast food, and not even many of those. I was not spending my $15 on a McFlurry and processing fees.”

Some users tried to talk to Grubhub support and were faced with unhelpful answers and long wait times. Others apparently called the restaurants themselves.

“It has been over 3 hours and the restaurant person almost cried when I called; she said they had over 300 orders and everything has gone to hell,” one user wrote.

One Twitter user claimed to be working front of house at a restaurant that participated in the promo.

“currently working front of house at a restaurant in Brooklyn and you guys big time messed up,” they said. “we have over 30 cold orders not being picked up by drivers and our phones are off the hook with angry customers. absolutely fucking over the entire NYC service industry today”

Other users were complaining about delays with their food, with some users claiming to have waited over three hours. Many resorted to joking at Grubhub’s expense.

“Who could have possibly predicted that Grubhub offering free lunch to the entire city of New York during a specific 3-hour window would be a complete disaster?” one user said.

GrubHub did not respond to the Daily Dot’s request for comment.