A Gmail timeline: From Wave to Inbox and everything in between

The road to hell is paved with good intentions, and it looks like the road to Inbox was, too.

Unlike things we love to hate—bad TV, Facebook, weird Tinder dates that make good stories—email and taxes are two things we actually, truly, purely, simply hate. In technology years, email is an old idea. So is taxation, though, and it’s an old idea that sticks around make to roads and schools and other things we don’t hate. But email has proven itself vestigial—we shouldn’t have carried it this far.

On much of today’s oil-slick, signal-amped social Web, the echoes of our intentions—Likes, left swipes, faves, and so on—manifest so seamlessly that we hardly even consciously choose them at all. With email, it’s all seams, all noise. Bitterly, we fumble around. 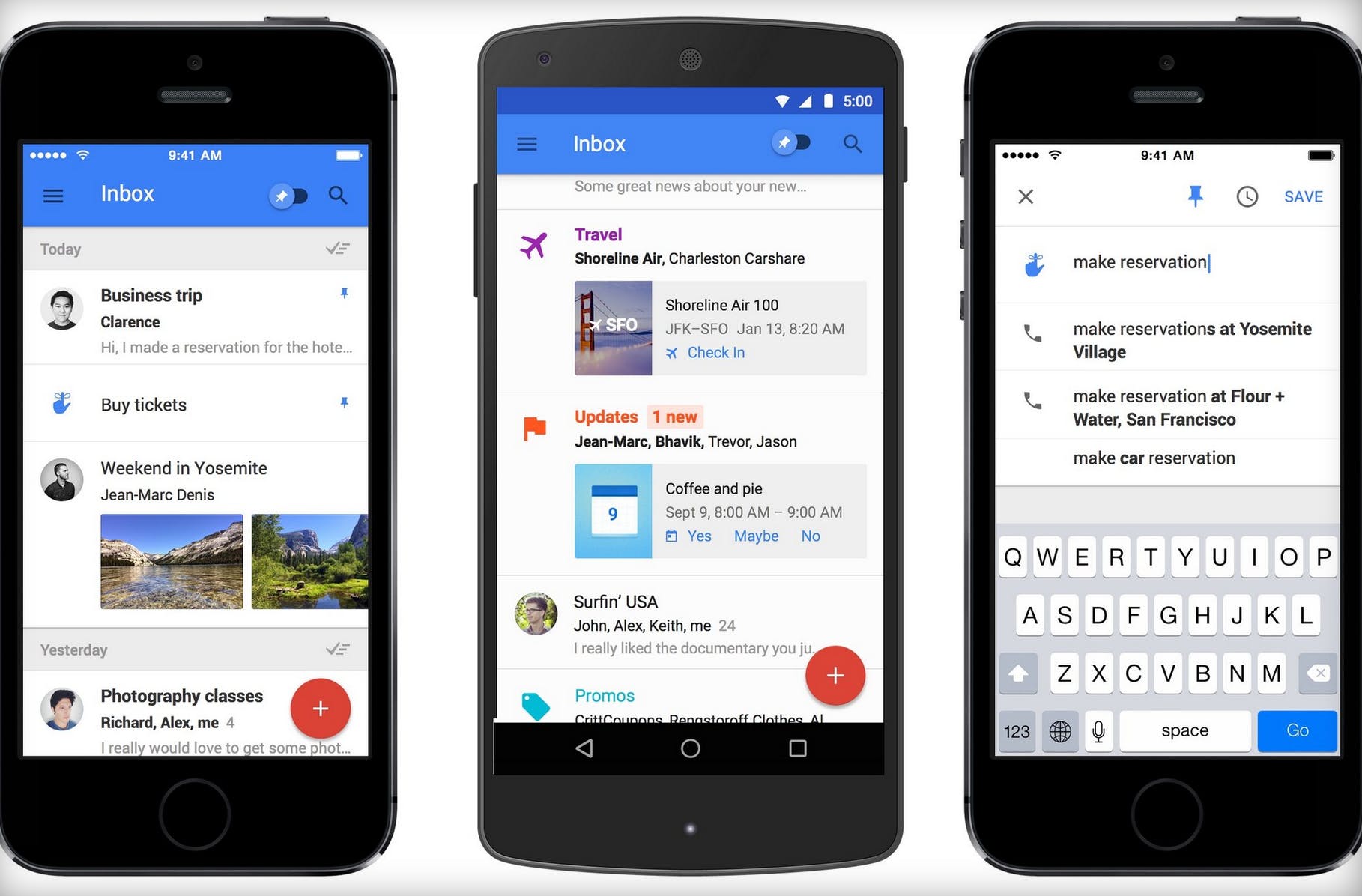 Designed to reinvent but not replace Gmail (yet), Inbox gently ties into Google+, Google’s social network, and Hangouts, Google’s chat app. We’re still kicking Inbox’s tires, but any gesture toward fixing the digital era’s most miserable yet ubiquitous form of communication is a godsend.

Still, this isn’t Google’s first post-Gmail attempt to mend email’s inherent brokenness. Google’s road toward reinventing non-instant-messaging has been a long, slow slog over the last 10 years—and there have been a host of dead ends and detours along the way. If we’re lucky, they were all wending their way toward something better.

The road to hell is paved with good intentions, and it looks like the road to Inbox was too. 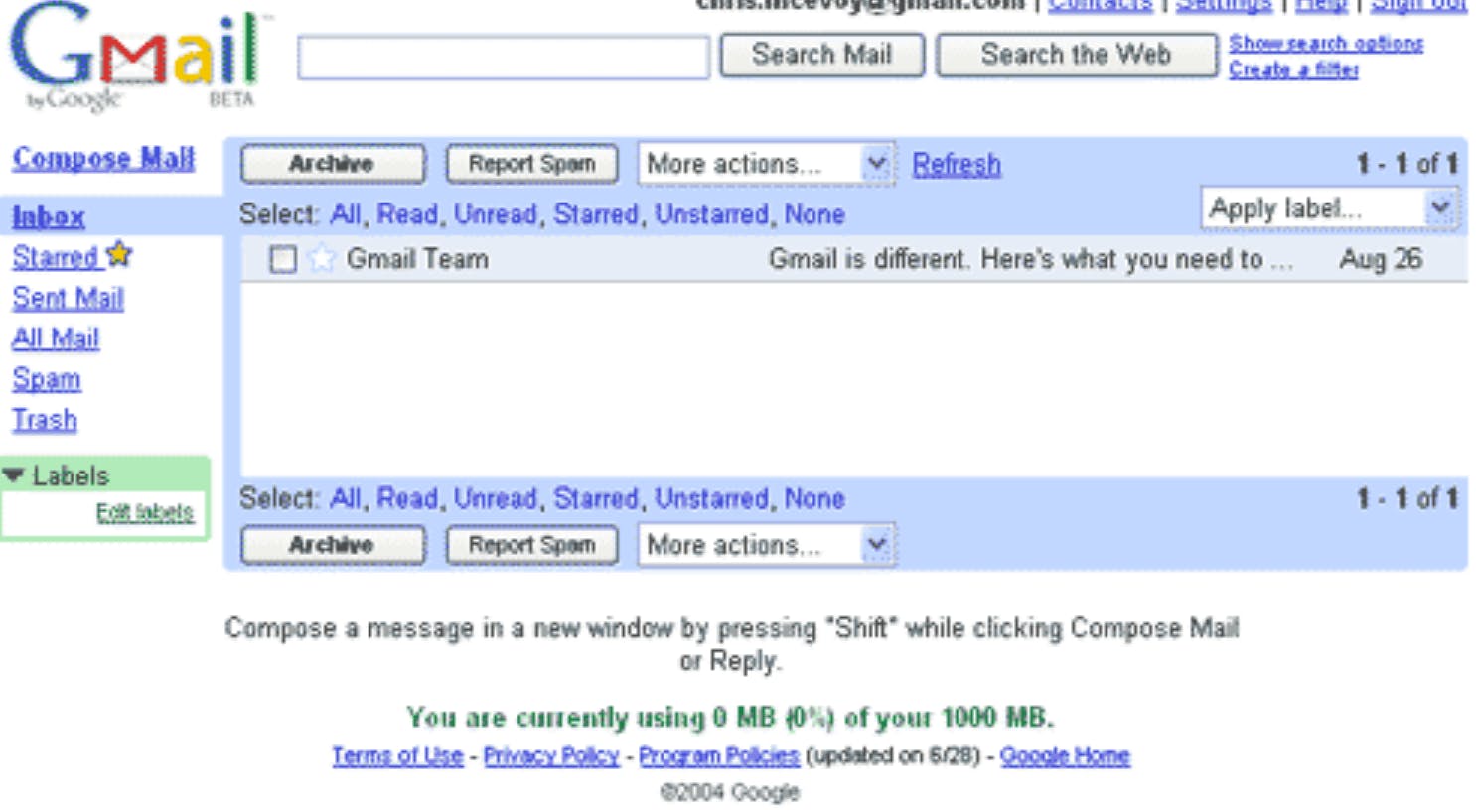 10 years ago, Google pulled off the unthinkable: It tricked us all into wanting email. Gmail launched in 2004 as the kind of invite-only service that we were soon conditioned to throw ourselves at. It was a refinement of existing solutions like Hotmail, AOL Mail, Yahoo Mail, and Outlook. It exited beta in 2009. Google doesn’t release official numbers often, but these days Gmail boasts more than 500 million active users and passed one billion Gmail app installs earlier in 2014. 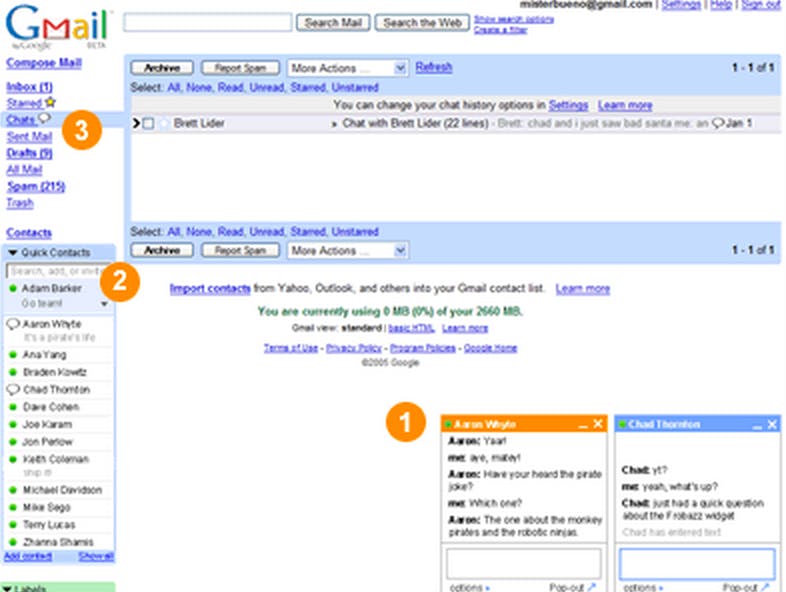 Google’s longstanding instant messaging client launched in 2005 and lives on to this day. The chat client known unofficially as Gchat and Gtalk is now officially part of Google’s sort of messy chat conglomerate known as Hangouts, but began as Google Talk, “a small program that lets you call and IM other Google Talk friends over the Internet for free.”

Google Talk made a home within Gmail back in 2006, where it still offers a realtime alternative for messaging Gmail and Google+ contacts. Google’s been trying to figure out how to integrate its two most prominent yet not-quite-complementary forms of communication ever since. 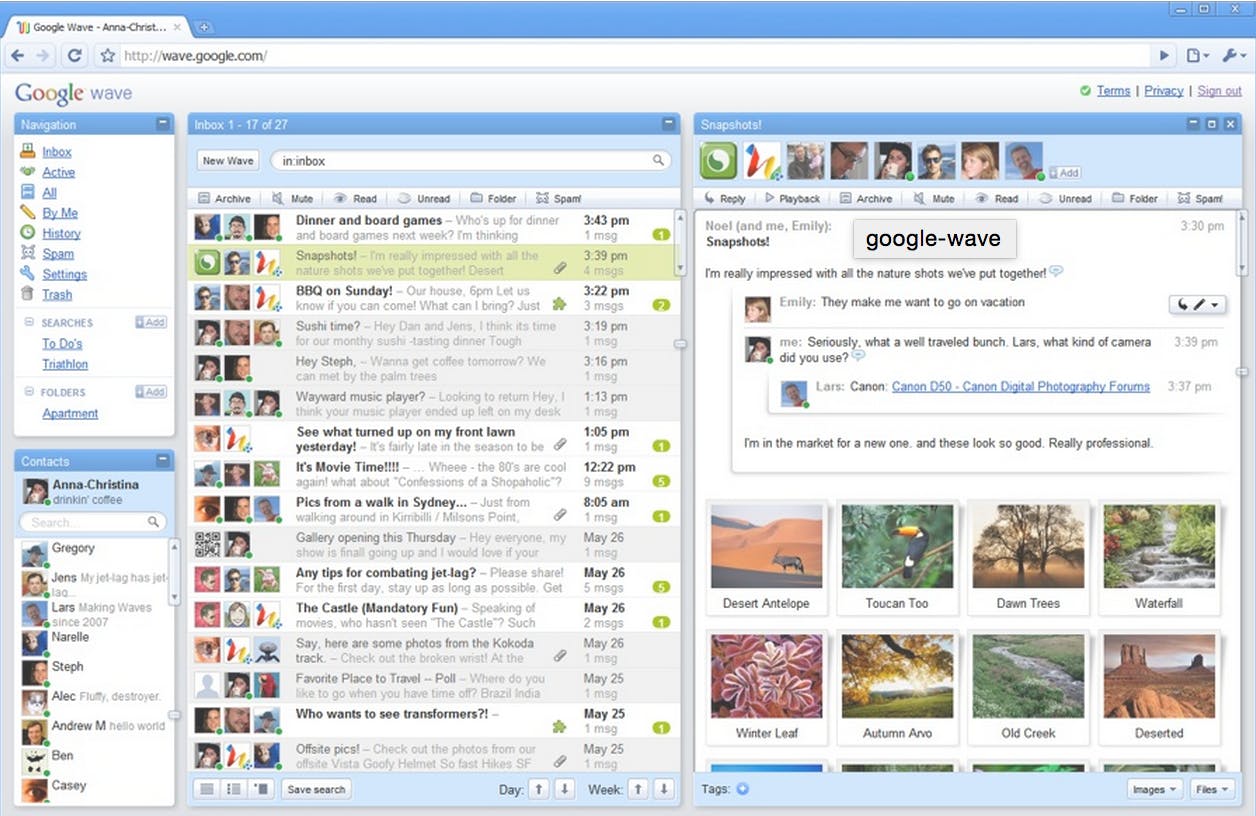 Before Google+, there was Google Wave. The project’s lead engineer explained Wave by articulating a tension that social networks and email services still haven’t resolved. It sounded good at the time:

“Two of the most spectacular successes in digital communication, email and instant messaging, were originally designed in the ’60s to imitate analog formats—email mimicked snail mail, and IM mimicked phone calls.”

Wave was Google’s first ambitious if ill-fated stab at merging the separate, often maddeningly redundant worlds of email and chat. It even tried to make Wave a sort of collaborative tool, like a shared Google Doc, with a living record of changes and comments. But with an invite-only system, a laggy interface, and a confusing melange of disparate features, Wave failed to gain traction. By August, 2010, Google ceased development on Wave, shuttering it altogether in 2012. 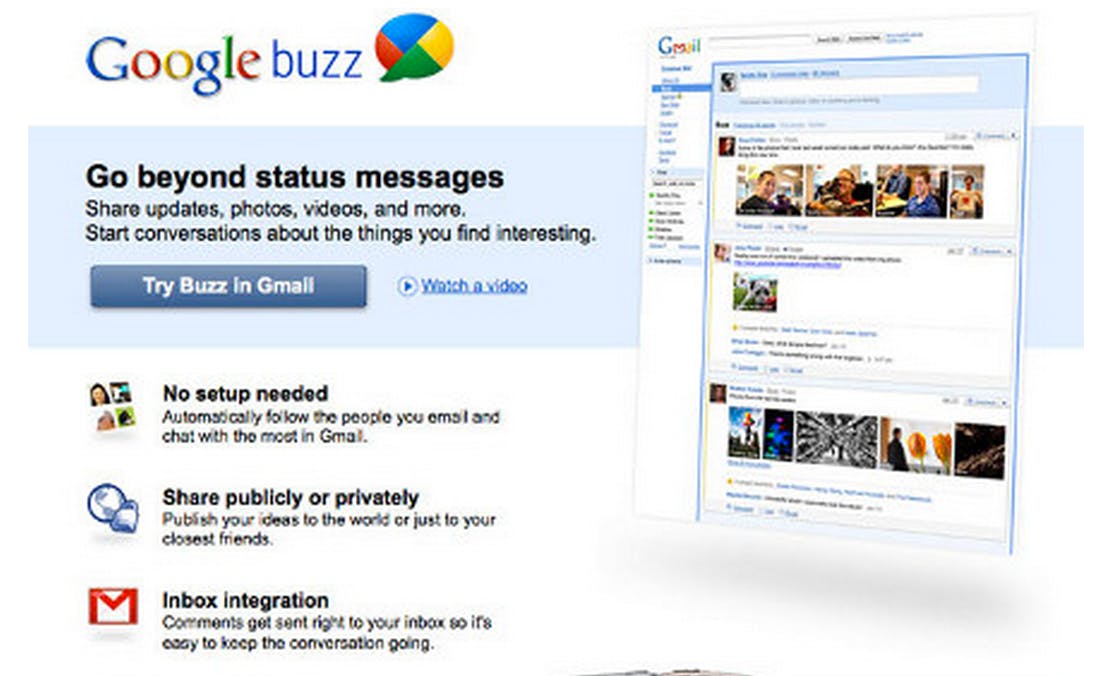 In its introductory blog post, Google framed its intentions around Buzz, a sort of realtime social layer draped over Gmail. Again, it sounded like an improvement, like something that would help email grow alongside the rise of realtime chat apps:

“Google Buzz is a new way to start conversations about the things you find interesting. It’s built right into Gmail, so you don’t have to peck out an entirely new set of friends from scratch—it just works. If you think about it, there’s always been a big social network underlying Gmail. Buzz brings this network to the surface by automatically setting you up to follow the people you email and chat with the most.”

It quickly became clear that Buzz was thoroughly doomed. After widespread backlash among unwitting Buzz users resulted in such a huge privacy blowout that the FTC got involved, in October 2011, Google threw in the towel and announced its intentions to shut it down.

In 2010, Google handed us Priority Inbox. Gmail’s thoughtful mobile app continued to improve but not revolutionize Gmail, taking out a bit of legwork user-side. Priority Inbox, which aims to “help you focus on the messages that matter most,” remains a noteworthy milestone: Recognizing that irrelevant email proliferated, Google gave users a decent, automated way to sift out the often tiny portion of messages that mattered. 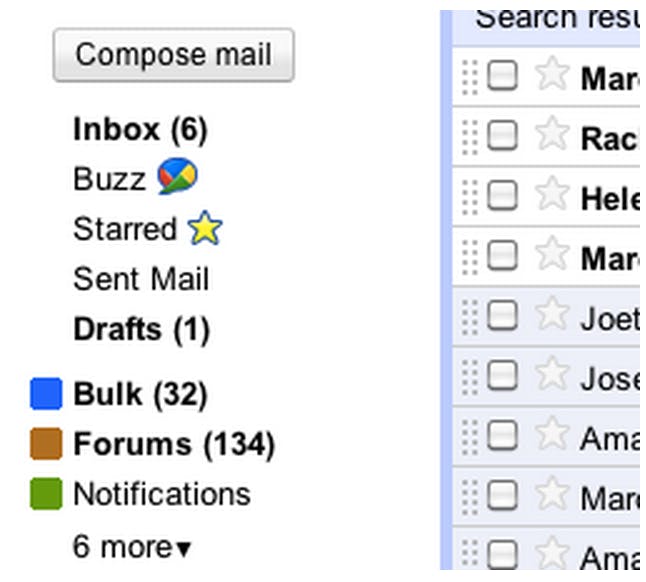 In 2011, Google introduced Smart Labels, a Labs feature and another step toward modernizing Gmail to keep up with Google’s evolving emphasis on predictive search results. The idea with Smart Labels is that less important stuff would be sorted into three categories (Bulk, Forums, and Updates) which a Gmail user could then check at their convenience. 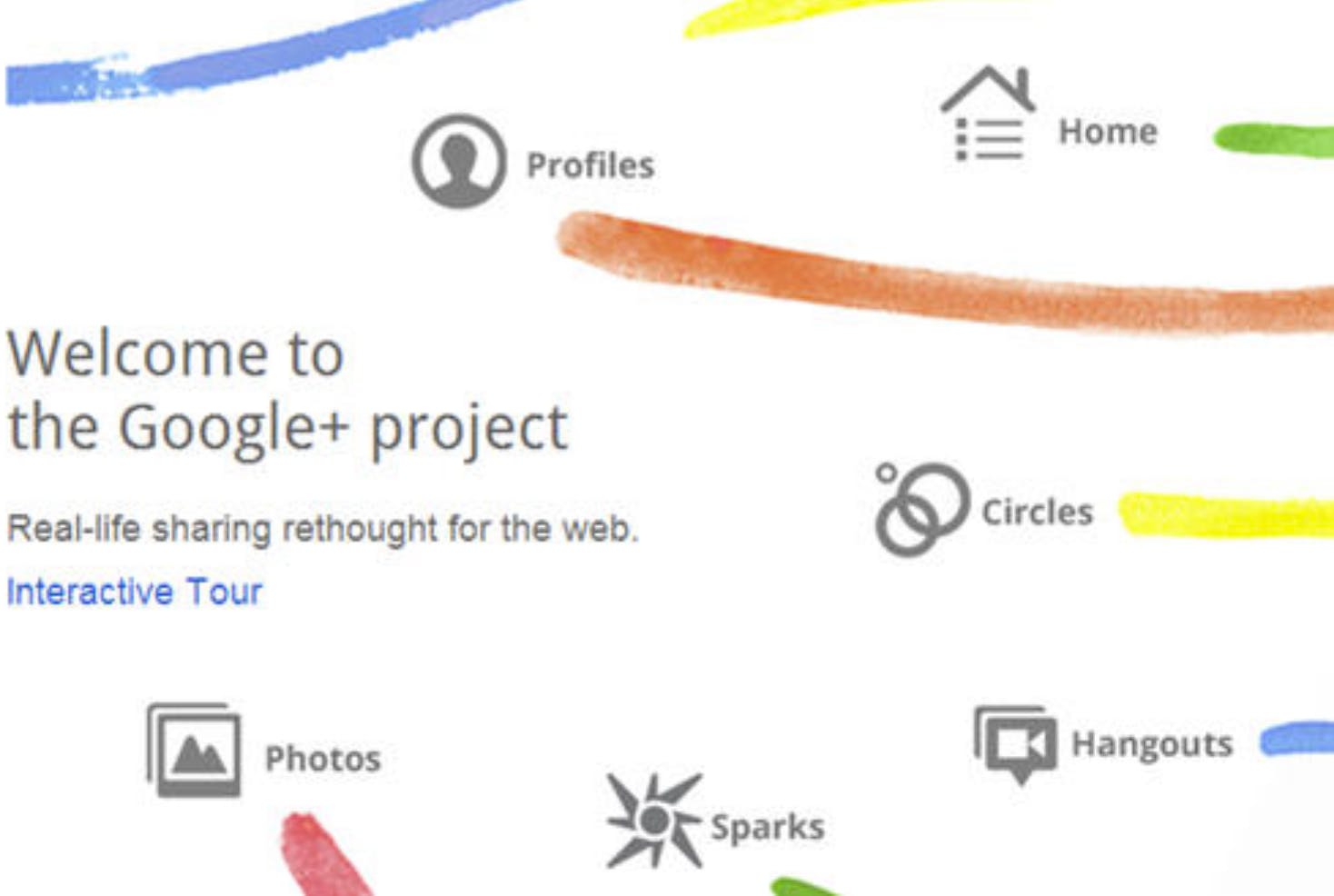 A year after Buzz’s spectacular failure, Google was at it again with another sprawling, invite-only social experiment that loosely tied into Gmail. Google enthusiastically threw its full weight behind Google+, a polished new social layer initially called “the Google+ project.”

Three years later, Google+ is alive, but “well” is a different, more complicated story. After its biggest proponent resigned in April, 2014, Google conspicuously downplayed Google+ at its Google I/O 2014 keynote talk. Before Google’s enthusiasm for Google+ dampened, it often looked as though the more realtime network might be the revolution that Gmail users were waiting for and hints to that effect bubbled up at prior Google events. Though Google+’s fate remains uncertain, Gmail and Google+ remain separate but lightly interwoven products. 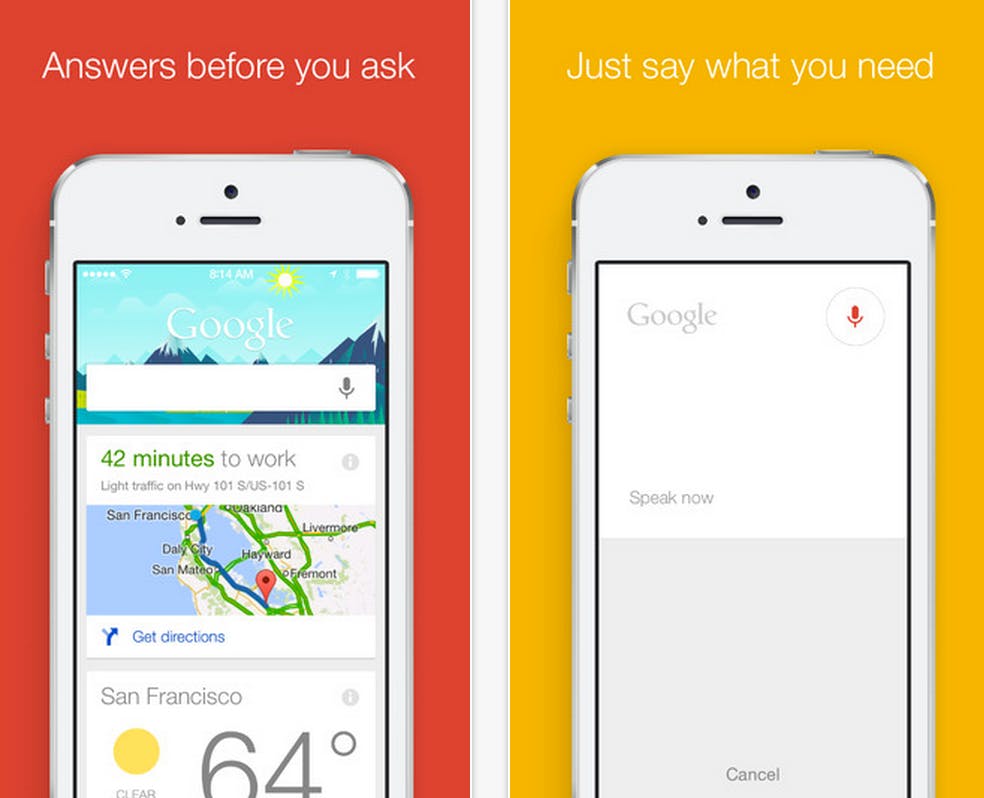 Gmail still clings to a search-driven model of email inspired by Google’s searchy roots. Search is Google’s foundation, but its future (and arguably its present) is Google Now, an anticipatory data system that serves users “cards” with stuff they need to know before they even know they need it. Google Now is deeply integrated into some of the Googliest products around, including Android, Google Glass (basically a wearable version of Google Now), Android Wear, and, increasingly, Google Search. New cards are regularly added to Google Now, and the service even managed to infiltrate iOS through the App Store. If anything is unifying Google’s vision these days, it’s Google Now.

In May 2013, Google introduced a tabbed Gmail view that sorts email into a handful of folders. It wasn’t a revelation, but it displayed Google’s growing confidence in its own predictive data systems. In this mild reimagining of Gmail, users trusted that the foreground data—in this case emails from frequent/important contacts—would be the most relevant and timely. If all went well, emails relegated to the lesser tabs, like Facebook notifications, emails about J.Crew sales, and mailing list updates, was all stuff we could worry about later.

10 years after its debut, Google’s email experience remains largely unchanged. For most of that time, the company has made gentle tweaks to Gmail or launched a social product in parallel to its popular email service. Google’s original vision of search-powered email remained, until now. Enter Inbox. With Google Now-like smarts and a very Mailbox-inspired focus on action, Google’s brand new email interface (yes, it’s strictly invite-only) looks compelling, if familiar.

Over the last decade, Google has steadily grown its portfolio, buying up talent and technology, all while deepening user knowledge with bottomless search insights and ever-cleverer machine learning systems. As it sprints into the far future with Google X’s driverless cars and contact lens computer chips, it was easy to assume Google had forsaken the universal unit of digital communication altogether. Things looked bleak—after Google bought Sparrow, a well-loved email client, incentives for startups to disrupt email dried up altogether. 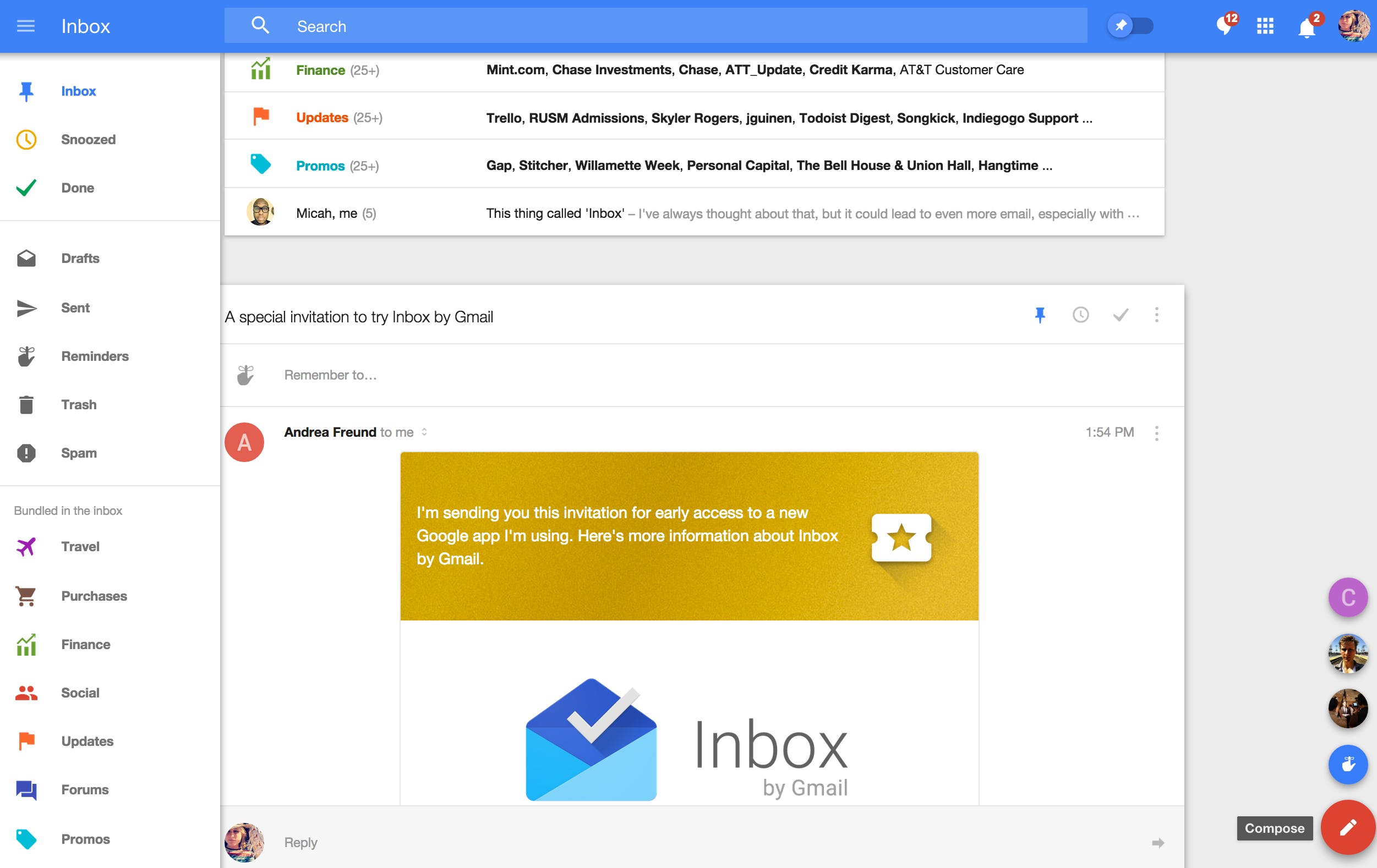 In its mission statement for Inbox—a project “years in the making”—Google articulates our shared plight:

”We get more email now than ever, important information is buried inside messages, and our most important tasks can slip through the cracks,” Google’s Sundar Pichai explains. “For many of us, dealing with email has become a daily chore that distracts from what we really need to do—rather than helping us get those things done.” Pichai goes on, reassuring neophobes and neophiles alike: “Gmail’s still there for you, but Inbox is something new.”

Something old, something new. As the story goes, in 1971, a man named Ray Tomlinson sent history’s very first email:

“I sent a number of test messages to myself from one machine to the other. The test messages were entirely forgettable… Most likely the first message was QWERTYIOP or something similar.”

But maybe—just maybe—this time, Google can drag email, kicking and screaming, into its own uncertain future.