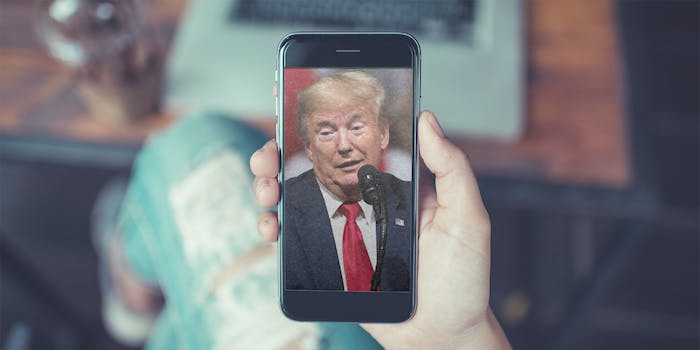 Trump is apparently looking to launch his own social media platform

Former President Donald Trump hasn’t had the same kind of megaphone he used to have on social media after major platforms banned him following the Capitol riot in January. Now it looks like he’s going to create his own.

Trump is planning on launching his own platform in two or three months, a senior adviser told Fox News on Sunday. It’s unclear what exactly the platform would look like, but you can probably bet on it being overly Trump-centric.

“I do think that we’re going to see President Trump returning to social media in probably about two or three months here, with his own platform,” Jason Miller, a spokesperson for the former president’s 2020 campaign, told Fox News.

Miller went on to hype the apparently forthcoming new platform, saying it would be the “hottest ticket in social media” and “completely redefine the game.”

Trump’s former adviser didn’t elaborate much more about details, only saying that Trump has been having meetings at Mar-a-Lago about launching the platform.

Trump’s favorite platform, Twitter, banned Trump following his involvement with inciting his followers ahead of their storming of the U.S. Capitol on Jan. 6. Other social media platforms like Facebook and YouTube also suspended Trump.

There is also a bit of irony here, as Trump’s social media platform would benefit from Section 230 of the Communications Decency Act, a law that he spent the last months of his presidency fixated on and repeatedly calling for the repeal of.