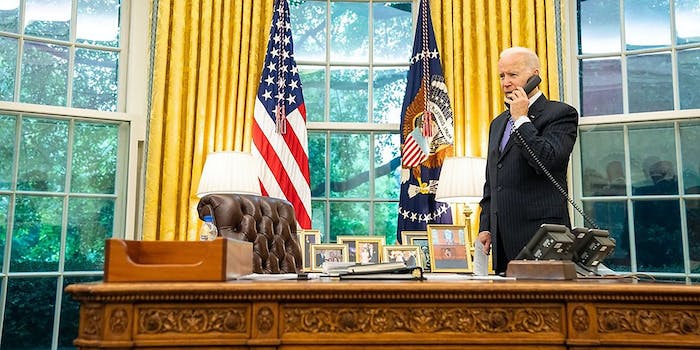 Followers of the conspiracy theory say a reflection on a White House window showed the ex-president.

Followers of the QAnon conspiracy theory believe Donald Trump was recently in the White House after spotting what they claim was his reflection in an Oval Office window.

The outlandish claim first emerged last week after an image of President Joe Biden, speaking on the telephone behind his desk, was uploaded to the official POTUS account on Instagram.

The innocuous picture quickly made its way to Telegram, an instant messaging platform popular among conspiracy theorists.

The popular QAnon-related account “We The Pepe,” according to Newsweek, argued to its more than 75,000 followers that Trump could be seen in a window on the far right side of the image.

“Did you see who’s in the reflection?” the account wrote. “Go see for yourself.”

It wasn’t long before the absurd allegation made its way to other popular QAnon influencers such as MelQ, who boasts more than 140,000 followers on Telegram.

The image was cited as proof that Trump was secretly in charge of the country, an already-prominent conspiracy theory in the QAnon community.

Other QAnon followers claimed that the image had originally shown Trump and that Biden had been edited in.

“Did they just photoshop mumbles Biden into a picture that was taken while DJT [Trump] was in office. Asking for my fren [sic] that questions everything,” another Telegram user said.

QAnon supporters currently believe that Trump will be reinstated as president in August, the latest date in a long line of failed predictions regarding Trump’s expected resurgence in the wake of his 2020 election loss.

The QAnon conspiracy theory surrounds the belief that a government insider known as “Q” was secretly dropping hints on a far-right message board about President Donald Trump’s battle against a global cabal of child-eating pedophiles.

Ron Watkins, the former administrator for the message boards where the so-called “Q drops” were made, has repeatedly been accused of being responsible for the posts.