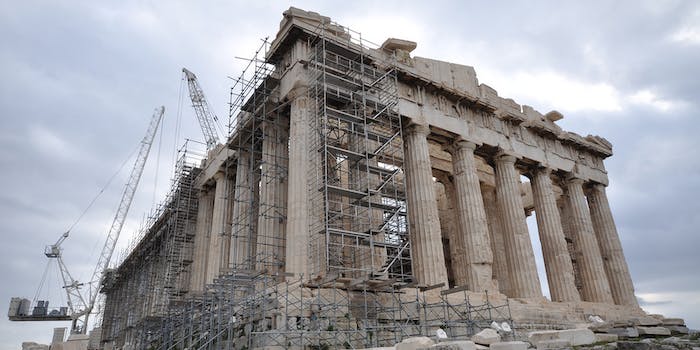 Even Washington hypocrisy can be disrupted.

American democracy needs some repairs, and a new app for tracking your legislators’ voting record wants to put “the power of government oversight in your hands.”

When it launches near the end of this year, the app, called Get Democracy, will take its mission a step further than most electoral transparency apps. It doesn’t just list your senator’s voting record. It compares that record with your own policy positions to show you how closely your representative represents your views.

Jason Cohen, the founder of the company behind the app, tells the Daily Dot he was motivated to build it after reading studies that suggested that American politicians were voting against their constituents’ interests.

Cohen cites a recent Princeton study showing that “ordinary citizens … have little or no independent influence on policy at all” in the United States. The same study found that economic elites almost always get their way when it comes to federal policymaking. “A proposed policy change with low support among economically elite Americans (one-out-of-five in favor) is adopted only about 18 percent of the time,” the study reported.

“It made me very angry,” Cohen says. “I wanted to find a way to hold elected officials accountable.”

Get Democracy compares users’ stated policy preferences with federal legislators’ views as determined by their voting history. After these two streams of data have been analyzed and classified, the app evaluates the overlap—or gap—between them.

“Our goal is to measure the two sets of data against one another,” Cohen said, “and also make it really easy and transparent for people to make decisions.”

With the app still in the development stage, Cohen plans to launch a Kickstarter campaign to “gauge people’s interest and see if they want to be involved.” In the mean time, Cohen says, his team of three people is working on Get Democracy’s API and backend systems.

Cohen considers himself an optimist when it comes to technology’s potential to transform politics. “In terms of making changes, I’m actually more confident than in the past,” he says, “because of the nature of the technology. Things can be tried faster and cheaper, and proven or disproven a lot faster than in the past.”

“If you’re not optimistic and hopeful,” he adds, “then you shouldn’t be attempting to try to do something like this, because you’ll never be successful.”

The biggest problem Cohen identifies with digitally-driven political movements—one that he said pervades all kinds of digital activism—is the enthusiasm gap. A lack of sufficient motivation, he says, keeps people at home on Election Day even as they express enthusiasm about politics online.

Cohen realizes that it’s not enough to tweet about accountability or use his app. “The biggest challenge is, how do you get people, once they’re motivated online, to actually take some kind of physical action to make improvement?” he says.

“In terms of accountability and making more people aware, I think technologies like ours and other people who are trying to do similar things, I think the jury is still out on that,” Cohen says. “That’s going to be tested, and I think it will be tested in the next couple of years.”

Photo via Jorge Láscar/Flickr (CC BY 2.0)