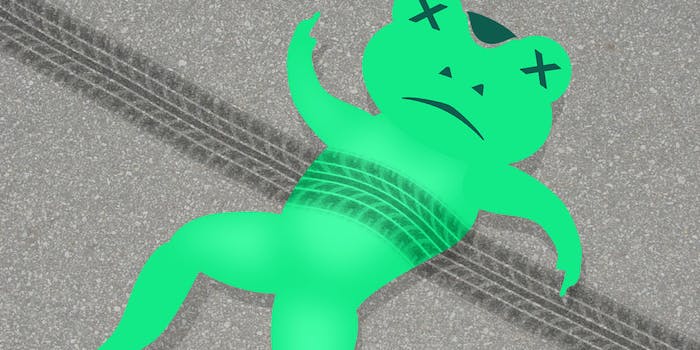 Meet ‘Dissenter’: A far-right ‘comment section’ for hating on journalists

Welcome to the home of everything MAGA and Gamergate.

Have you ever hated journalists so much that you wanted to create an online commenting system just so you could complain about them behind their backs? Well, we have good news for you. If you’re a card-carrying member of the far-right, you can now shout into the void with Gab‘s new social media platform Dissenter, the self-described “comment section of the internet.” It’s basically StumbleUpon for people who voted for Trump.

Dissenter lets posters share a URL, comment on it, and see if others also have opinions. While the site essentially lets users discuss articles in a centralized place, it also doubles as a stomping ground for randomly complaining about things on the internet. Tweets, YouTube videos, and articles discussing Dissenter regularly flood the service, with very little constructive discussion actually going on in the site. It’s mostly just an echo chamber for conservative users who want to complain about feminism or Democrats. Hell, you can even install a browser extension to see what your right-wing buddies are saying while you browse through Breitbart.

It’s easy to see why Gab created Dissenter. While most news sites have gradually removed their comments sections amid harassment and dogpiling against journalists—the Daily Dot retired its comments section in 2015—Dissenter is trying to give its users a place to mobilize against mainstream news media and lash out collectively.

For the record, slurs are commonly found on Dissenter and they range from racial epithets to homophobic comments.

Gab creator Andrew Torba acts as if the Dissenter is a free speech haven, but “free speech” isn’t absolute. There are limits to what one can and should say in a public space. And besides, there are already thousands of other news aggregate websites out there with minimal moderation, letting users pretty much say what they want. Reddit is a classic example. So is Mastodon’s fediverse.

Of course, this is Gab we’re talking about. Gab is a notorious hot spot for the alt-right. The site played home to Tree of Life mass shooter Robert Bowers, who posted to the site before killing 11 and injuring seven during morning Shabbat services. “Free speech” is just a cover here. Dissenter isn’t about protecting the First Amendment; it’s about letting its users punch down on marginalized journalists, Twitter users, and public figures.

For the record, things are going just as you would expect on Dissenter right now. The Daily Dot gained access to Dissenter via this reporter’s Gab account (however, anyone can see posts on Dissenter; you just need a Gab account to join and post). Articles from far-right sources such as Breitbart, the Gateway Pundit, and Info Wars are commonly posted on Dissenter, and more often than not, users simply copy and paste tweets onto the platform and comment on them.

Discussions vary. One post calls House Speaker Nancy Pelosi (D-Calif.) an “evil Satanic bitch” whose “time is ending, the pain in [sic] incoming.” Another claims “everyone working and earning more knows that things are way better under President Trump.” A third post lashes out at Rotten Tomatoes after the site closed its “Want To See” system amid misogynistic review-bombing over Captain Marvel, with one woman claiming the movie’s “primary actor went out of her way to alienate the audience, and succeeded.”

At times, comments are verbal diarrhea and difficult to understand. In a rant filled with improper grammar and spelling errors, a user claims LGBTQ activists “want to marry your 3-year-old” and “be women with a willy-dilly.”

“[Trans women want to] sell their unborn as a vulgar piece of meat at the butcher around the corner Trans your 5 year old so they can make it a sex slave And much worse,” one commenter complains. “See the inhuman mental illness level?”

Journalists are a common target on Dissenter, and users regularly turn to publications’ homepages as venting grounds. CNN is a favorite to hate on, with users calling it “fake news.” Meanwhile, visit Dissenter’s BuzzFeed’s page and you’ll see users spamming “learn to code,” an insult hurled at journalists to imply that they should switch to the tech industry after being laid off.  The Kotaku page’s comment section shows a long list of users posting the #Gamergate hashtag, with some complaining about the site’s reporting.

Dissenter is particularly sensitive to criticism, and negative reporting can lead to endless criticism in a far-right hugbox. Case in point, after Vice’s David Gilbert penned a report criticizing Dissenter, users shared the URL and claimed Gilbert’s writing was “slander” and part of a “smear.” One poster called Vice “fake news,” while another wrote, “learn to code.” Even Torba jumped into the post, arguing Gab “is not a ‘far-right social network.'”

“No comment section on Vice? What a surprise. Not anymore!” Torba wrote on his own site. (The Daily Dot reached out to Torba for comment for this report.)

Dissenter isn’t doing anything new for the internet. It’s just an extension for the alt-right, one to help them mobilize against journalists, critics, and progressive websites. That shouldn’t be surprising. If you’re really looking for a space to share your opinions without “rampant corporate censorship,” as Torba claimed in an email to Gab users, there are already plenty of alternative social media networks out there that let you share your voice as long as you aren’t a bigot. But if you’re headed to Gab or Dissenter, you aren’t there to post in good faith.

“All of the right people are mad about Dissenter. According to plan. They can’t stop it. They can’t do anything about it. It’s glorious,” Torba posted on his Gab account.

One hour later, Gab was apparently having maintenance issues. That didn’t stop Torba from getting defensive when HuffPost’s Jessica Schulberg pointed this out.

lol Gab is down again https://t.co/r9juMqqo3b