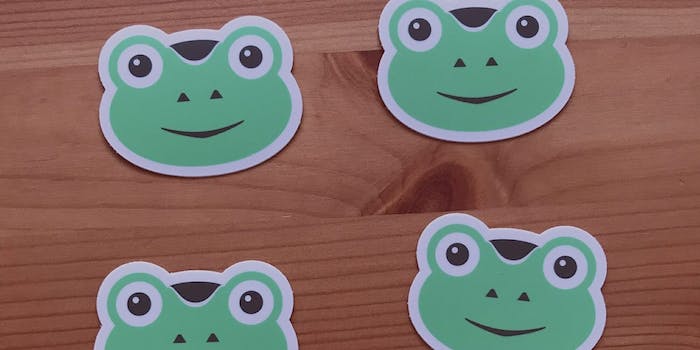 The site isn't handling it too well.

Now, companies are pulling support from the service left and right, and Gab isn’t handling it too well. After Gab’s domain registrar GoDaddy threatened to pull the plug on the website after discovering “numerous instances of content on your site that both promotes and encourages violence against people,” Gab has since tweeted over 60 times in an existential panic and taken down its website.

“Gab.com is under attack,” Gab writes on its homepage. “We have been systematically no-platformed by App Stores, multiple hosting providers, and several payment processors.”

The site says that it is transitioning to “a new hosting provider” and that the service “will be inaccessible for a period of time.” It remains unclear how long that will be—one tweet suggests Gab will “likely be down for weeks,” another claims it is working on the transfer “today/tomorrow”—but until then, the right-wing service has hinted that it will move hosting services to a location outside the U.S.

Of course, this hasn’t stopped Gab from acting as if it’s on a gradual death march.

“There are like 3-4 total companies who decide if you exist on the internet or not,” Gab said while tweeting from its uncensored and verified Twitter account. “In the future that will mean they decide if you ever existed at all. Ponder that.”

GoDaddy isn’t the first company to pull support from Gab, hence the site’s erratic tweets. In the past two days, four other organizations have either stopped working with the service or are set to do so: Joyent, PayPal, Stripe, and Medium.

PayPal removed Gab’s accounts on Saturday, and shortly after that, hosting service Joyent announced that it would shut down Gab’s account by Oct. 29 at 9am ET, Gizmodo reports. Meanwhile, payment service Stripe reportedly suspended Gab bank account transfers “effective immediately” as the service conducts an investigation into whether the site “actually prevents violations of our policies” in Gab’s monetization offers. Gab also claims the service is “banned” from Medium, which removed the site’s response post to the Pittsburgh shooting.

The Daily Dot has since reached out to Medium and Stripe but has not received a response as of this article’s publication.

Meanwhile, Gab is struggling to hold itself together. The site is flooding its users’ timelines with alt-right memes, including one that superimposes Gab onto John Wick as Google, Microsoft, Facebook, and “Fake News” point guns at him. Another compares verified Twitter users to NPCs, the alt-right’s latest dehumanizing meme. This is despite the fact that Gab is also a verified Twitter user, but facts over feels, right?

Gab also left their cap locks on for multiple tweets, including one where it warns users to “GET TO THE POLLS” because the U.S. is at risk of “LOSING THE BILL OF RIGHTS IN THE UNITED STATES TO LITERAL COMMUNISTS.”

“THIS IS NOT A DRILL,” the account screamed into cyberspace.

The worst thing about sites like Gab is that they don’t understand how the first amendment works.

Others are using this as an opportunity to criticize Gab, reveal how the site encourages bigotry, and point out how Gab is being disingenuous with its right-wing intentions by touting itself as a “free speech” platform.

I question this frequent assumption I see that Gab is rooted in “free speech” radicalism, instead of being quite clearly meant specifically to host hate speech.

Since Gab is thirsty af and searching their name on twitter because they can’t currently use their own platform to whine about white genocide, my mentions will now be an illuminating list of people we should all keep an eye out for.

The answer to "bad" speech will never be to create a sheltered hub for hate groups to connect and influence each other.

Gab, meanwhile, is also trying to save face with a new tactic by saying it “took the site down early on purpose” because “we knew the media would take the bait.”

“So much whining, so little hosting,” a critic responded.