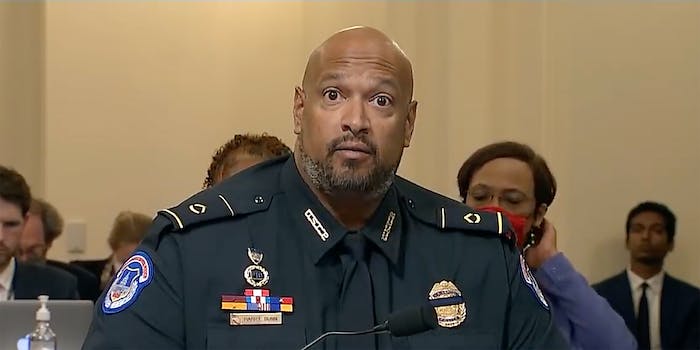 QAnon conspiracy theorists are mad that Harry Dunn is an Obama supporter.

During Tuesday’s congressional hearing on the Jan. 6 Capitol riot, Capitol Police Officer Harry Dunn delivered chilling testimony about being terrified and taunted with racial slurs during the event. Now the far-right is attacking him for being a liberal. Some of them appear to be coordinated.

The image, first posted by the John F. Kennedy, Jr. channel, claims that Dunn “has a history of anti-Trump statements and tacitly supported the BLM [Black Lives Matter] riots in Kenosha.”

In a June 2019 tweet included in the screenshot, Dunn wished former President Barack Obama good morning and said, “44>45,” referring to Obama and former President Donald Trump, the 44th and 45th presidents, respectively. In another tweet, from July 2019, Dunn wrote, “Racism is so American, that when you protest it, people think that you are protesting America!” He included hashtags supporting Rep. Ilhan Omar (D-Minn.) and #RacistInChief, an apparent reference to Trump, who’d had spent weeks attacking Omar. In the third tweet, from 2020, Dunn referred to Fox News host Laura Ingraham as a “trash ass human” and implied she is racist.

The JFK Jr. channel posted the image at 8:12am. Ron Watkins and Q Speaking channels shared it at the same time. (It’s unclear if Watkins controls this channel or if it simply uses his name and picture.)

In the next three minutes, the image was shared by six additional channels, four of which bear names referring to QAnon. The other two are AntiGates and a (presumably unofficial) Donald Trump Jr. channel.

This smear campaign comes after days of Dunn enduring criticisms from mainstream and fringe conservatives alike. Last week, Tucker Carlson called him “an angry left-wing political activist” on his show.

Dunn responded to Carlson saying that he would “lay down his life to protect a Member of Congress, regardless of being a Republican or Democrat.”

Dunn’s statement did little to assuage Carlson. Though, in fairness, Carlson may have taken it personally that Dunn called him “an out of touch asshole” on Twitter in 2019.

While other officers who testified about the Capitol riot have also been targeted, the far-right has been particularly vicious in its pillorying of Dunn, a Black man. In addition to his political views, which he has the same rights to express as anyone, they’ve attacked his credibility, masculinity, and support for equal rights for Black people.

The site National File accused him of claiming rioters called him the N-word “without evidence,” as though his testimony under oath doesn’t qualify as evidence. The Federalist sneered that he was “teary” and accused him of supporting the George Floyd “riots” in Kenosha, Wisconsin because he tweeted last summer, “why is murder an appropriate response to property damage but property damage isn’t an appropriate response to murder?”

Although he’s been speaking out for months, attacks on Dunn have intensified in the last week.

The vitriol hasn’t been without consequences. Last week, his attorney said that the day after Carlson did his monologue about him, Dunn began receiving an onslaught of “vile/racist” messages, many of which “specifically cite Carlson.”