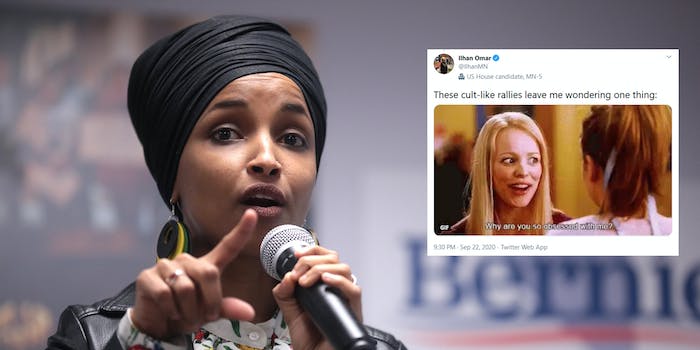 Trump once again brought up that Omar wasn't born in the U.S.

Rep. Ilhan Omar (D-Minn.) shot back at attacks from President Donald Trump on Tuesday by using a GIF of a popular line from teen comedy Mean Girls.

Trump, who has gone after Omar and other members of the so-called “Squad” of progressive lawmakers, told a crowd at a campaign rally in Pennsylvania that Omar shouldn’t be “telling us how to run our country” because she was not born in the U.S.

Omar is a naturalized citizen who fled Somalia when she was 8 years old. In 2019, Trump said Omar and other lawmakers should “go back” to their home countries. His remarks were widely condemned as racist. With an election looming, Trump went back to attacking Omar’s background.

“We’re going to win the state of Minnesota because of her, they say,” Trump told the crowd. “She’s telling us how to run our country. How did you do where you came from? How is your country doing?”

In response to Trump’s remarks, Omar shot back saying that the U.S. “is my country.”

“Firstly, this is my country & I am a member of the House that impeached you. Secondly, I fled civil war when I was 8. An 8-year-old doesn’t run a country even though you run our country like one,” the Minnesota lawmaker tweeted on Tuesday night.

But Omar wasn’t done. She followed up that tweet by posting a GIF from Mean Girls where the character Regina George says, “Why are you obsessed with me?”