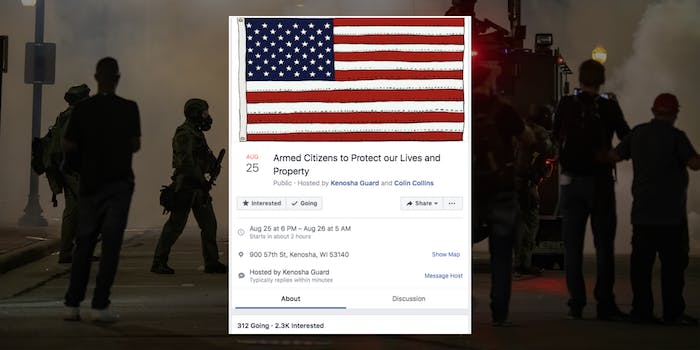 Last night, a Wisconsin protest turned deadly when a teen opened fire on protesters. This afternoon the Daily Dot reported that the teen, Kyle Rittenhouse, has been charged with first-degree murder in the shooting that claimed two lives.

Now Facebook has taken down the page of a local militia group linked to the shooting.

Protests erupted in Kenosha, Wisconsin after Jacob Blake, an unarmed Black man, was shot seven times in the back by police on Sunday. Looting and vandalism was reported.

Earlier this week, Kenosha Guard issued a call to action for people to protect property during the protests.

Kenosha Guard created a Facebook event calling “any patriots willing to take up arms and defend our city tonight from evil thugs.”

The event, Armed Citizens to Protect Our Lives and Property, was scheduled for yesterday.

Right-wing media seized on the call to arms. InfoWars said that it may have been inspired by the boogaloo boys, an extremist far-right movement that promotes guns and in some cases advocates for a civil war.

This morning, Kenosha Guard claimed that it had no idea if Rittenhouse was involved with the event.

“We are unaware if the armed citizen was answering the Kenosha Guard Militia’s call to arms,” it said. “Just like the shooting of Jacob Blake, we need all the facts and evidence to come out before we make a judgement [sic].”

Now both the event page and Kenosha Guard have been removed from Facebook.

Rittenhouse’s Facebook page has also been removed. It’s not clear whether this was an action he took independently or if Facebook deleted it.

Rittenhouse’s Facebook page was rife with Blue Lives Matter and other pro-police content. In recent profile pics, he posed with high-powered rifles.

A private Instagram profile that appears to be Rittenhouse’s remains live, albeit with no posts. His tagline on the page is “Blue Lives Matter.”

Facebook recently updated its policies regarding “organizations and movements that have demonstrated significant risks to public safety.” The company specifically referenced militia groups in its new policy.