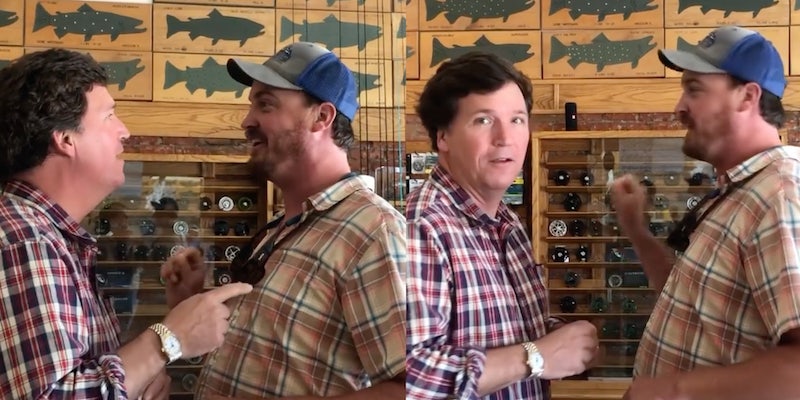 ‘You are the worst human being’: ‘Montana Man’ goes viral after confrontation with Tucker Carlson

The man did not mince words when criticizing the Fox News host.

A Montana man who spotted Tucker Carlson in his local fly fishing shop wasted no time in letting the Fox News host know exactly what he thinks of him.

The video picks up when Dan Bailey is already in the midst of confronting Carlson about vaccines. By the time the person filming gets over to where they are, Bailey is being perfectly blunt.

“You are the worst human being known to mankind,” he says. “I want you to know that.”

“I appreciate that,” Carlson replies in hushed tones, insisting he’s “not gonna debate.”

The quiet confrontation continues with Bailey, who works as a fly fishing guide in the area, dismissing the controversial TV personality’s reminder that his daughter is with him.

At that point, Carlson tells him to “settle down, son” and walks away. Bailey follows him, but that’s where the video ends.

Bailey held back even less when posting the interaction to his Instagram.

“What an asshole! This man has killed more people with vaccine misinformation, he has supported extreme racism, he is a fascist and does more to rip this country apart than anyone that calls themselves an American,” he wrote, tagging the post #fucktuckercarlson and #stayoutofmontana.

Bailey was applauded across social media for taking the time to approach Carlson—who is notorious for silencing guests on his show who disagree with him—and telling him exactly what he thinks.

The fishing shop where the interaction occurred stepped in after the video went viral to clarify that despite #MontanaMan’s name being Dan Bailey and the store itself being named Dan Bailey’s Outdoor Company, there is no relation between the two.

“To be clear, we treat every customer equally and respectfully,” reads a statement on their website. “Our staff was professional and cordial to Mr. Carlson, as we are with all of our customers.”