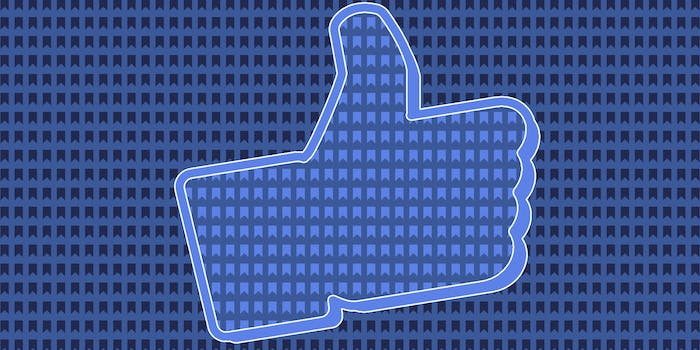 Should've called it the Facebookmark button, but whatever.

Facebook wants to be a vital news destination, and a recent test feature highlights that the company is still looking for new ways to move in that direction. Mark Zuckerberg announced his goal to make the social network the best personalized newspaper in the world last year, and since then, the company has been chasing down that dream.

So far, this as amounted to changing the Newsfeed algorithm to privilege news articles and launching a mobile news reader called Paper.

Now, Facebook is experimenting with another step down the newsreader road: A “Save” button.

As TechCrunch reports, a test group of users are seeing a “Save” button below news articles. As startup founder Dan Birdwhistell (who is part of the test group) pointed out, the button creates a page of bookmarks, encouraging Facebook users to approach their Newsfeed like a news reader. When someone saves a post, they can revisit it by clicking on a “Save” icon along the ride side of their desktop browser, right under “Events.”

There haven’t been reports yet of this feature surfacing on mobile, so it appears to be a desktop experiment. It’s extremely similar to another “Save” feature Facebook tested in 2013, so perhaps the social network is already in the fine-tuning stages.

When TechCrunch asked for comment, Facebook was vague, and Daily Dot received the same response. “We’re constantly testing new features, but we have nothing further to share at this time,” a spokesperson told us.

This feature could easily disappear before going anywhere, although the idea of Facebook becoming a reader is interesting, and I think they should take it several steps further, going from bookmarking to out-and-out reader syndication. Since Google Reader died (RIP forever), no RSS reader managed to claim the hold Google’s long-lamented reader has on our hearts.

Right now, I use Digg Reader, but if there was a reader attached to Facebook that showed which articles my friends recommended or read, I’d defiitely use it. And that’s despite the fact I find it somewhat disturbing to think of Facebook occupying an even more prominent place in my life.