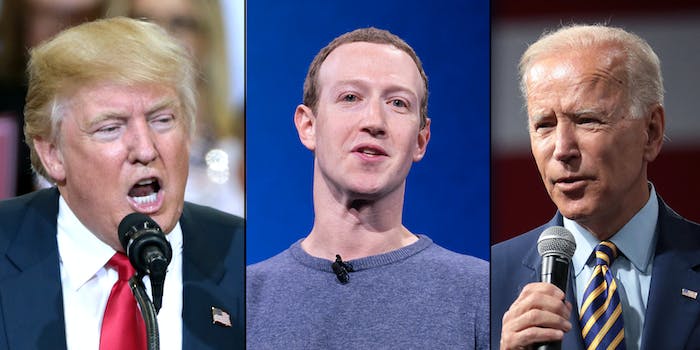 It's a big new announcement, but it doesn't amount to much.

Facebook is banning new political ads from running during the week leading up to the upcoming election, CEO Mark Zuckerberg announced early Thursday.

Zuckerberg’s announcement about political ads comes as the social media giant has faced intense scrutiny over its policy regarding them, especially when compared to other social media platforms. The company essentially allows political ads to say whatever they want, even if the information is false.

While new political ads will be banned during the week ahead of the election on Nov. 3, any existing ones already running will be able to continue being shown, Zuckerberg said.

“We’re going to block new political and issue ads during the final week of the campaign. It’s important that campaigns can run get out the vote campaigns, and I generally believe the best antidote to bad speech is more speech, but in the final days of an election there may not be enough time to contest new claims,” Zuckerberg wrote in a Facebook post on Thursday morning, referencing journalists ability to debunk false ads, a task the social media giant has offloaded to the industry.

Ads that are already running before the moratorium will also be able to be adjusted for targeting, he said.

Zuckerberg added that the social media giant will continue to remove posts about false information about polling conditions, and limiting the amount of link forwarding on its Messenger app.

Facebook says it will also remove posts that “claim people will get COVID-19 if they take part in voting” and will attach labels to posts that seek “to delegitimize the outcome of the election or discuss the legitimacy of voting methods,” like claiming “lawful methods of voting will lead to fraud.”

The company has been criticized for its political ads and its lax moderation when it comes to posts made by President Donald Trump.

The president has repeatedly claimed—without evidence—that mail-in ballots will lead to fraud, so it remains to be seen if the labels about delegitimizing the outcome of the election will apply to the president.

Twitter has banned political ads, and Google has made changes to how campaigns can micro-target potential voters with ads. Meanwhile, Facebook has allowed users to “turn off” political ads.