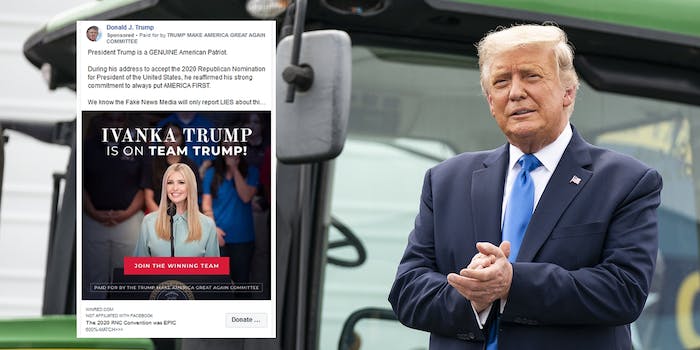 He apparently wants it very clear Ivanka Trump supports him.

President Donald Trump‘s reelection campaign is running a series of ads on Facebook that seem aimed to remind everyone that his daughter, Ivanka Trump, actually supports him.

While it would seemingly be obvious that his daughter, who works in his administration, would be supporting his reelection, the Trump family does have its share of people who disagree with his actions as president.

Data from Facebook’s Ad Library shows that the Ivanka Trump image has been used for to reach Facebook users from Trump’s official page and from the “Team Trump” page. The ad seems to be directed toward mostly women over 45 years old.

The ad follows his daughter’s speech on the final day of the Republican National Convention (RNC), where she lauded her father’s presidency and called him “the people’s president.”

The Trump Make America Great Again Committee ran other ads with the same text using a clip of his daughter’s speech on Friday as well.