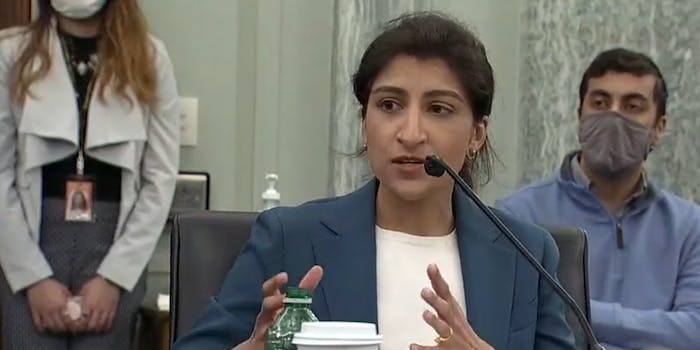 On Tuesday, Facebook submitted to the FTC an expert report from Northwestern law professor Daniel Rodriguez in favor of Khan recusing herself. The expert report was first noted by Politico.

Facebook joined fellow big tech giant Amazon in urging for Khan’s recusal earlier this summer. Both argued that Khan’s criticisms of big tech in the past make her unable to be impartial in any antitrust cases.

Khan, who has massive support from progressives and consumer interest groups, has been an outspoken critic of big tech companies. She published a 2017 paper called “Amazon’s Antitrust Paradox.” She was named the chair of the FTC following her confirmation hearing earlier this year.

The report from Rodriguez comes ahead of the FTC needing to decide whether it will amend its complaint against Facebook. A judge dismissed the complaint in late June, but left the door open for the agency to amend it and resubmit it.

Rodriguez essentially echoes Facebook’s assertion that Khan’s past criticisms would bar her from being impartial in a case.

“In my opinion, a reasonable observer could not conclude that Chair Khan is likely to bring an open mind and impartial attitude to Facebook’s case in light of her previous public statements, scholarship, and congressional work,” the report reads.

Earlier this month, a group of Democratic senators led by Sen. Elizabeth Warren (D-Mass.) criticized Facebook and Amazon for their efforts to have Khan recuse herself, saying the recusal requests were adding to the “perception” that they were trying “to bully your regulators.”