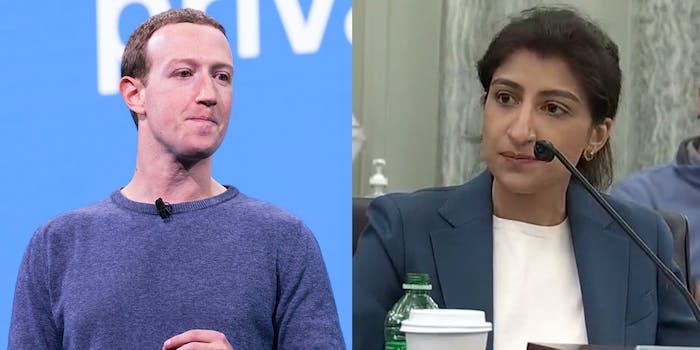 Facebook is following Amazon in pushing for Khan's recusal.

Facebook has joined fellow tech giant Amazon in calling for Federal Trade Commission (FTC) Chairwoman Lina Khan to recuse herself from antitrust cases against them.

Khan, who was named chairwoman of the FTC by President Joe Biden in June, has been an outspoken critic of big tech and has drawn a bevy of support from activist groups.

However, as pressure continues to build on big tech companies in Washington, D.C., both Amazon and Facebook are calling on her to recuse herself from antitrust cases against them.

The Wall Street Journal reports that Facebook made a formal recusal petition to the FTC on Wednesday arguing that Khan has “made public statements not only accusing Facebook of conduct that merits disapproval but specifically expressing her belief that the conduct meets the elements of an antitrust offense.”

It is a similar argument to Amazon, who in June argued that under Khan’s leadership the FTC could not “be a neutral and impartial evaluator of the evidence developed in any antitrust investigation against Amazon.”

Both of their arguments can be seen as a pushback against the tide of antitrust sentiment that has come from the Biden administration in recent months.

The recusal petition comes almost two weeks after a group of lawmakers from both chambers of Congress urged the FTC to keep pushing its antitrust fight against Facebook after a U.S. District Court judge dismissed its lawsuit against the social media giant.

However, the judge dismissed that lawsuit—where the FTC alleged Facebook maintained a monopoly over personal social networking—without prejudice, leaving the door open for the agency to amend its complaint and file it again.

Facebook’s request also comes after Biden signed a sweeping executive order that, among many other things, urged the FTC to “establish rules on surveillance and the accumulation of data.” In a fact sheet about the order, the White House noted that big tech companies were “gathering too much personal information.”