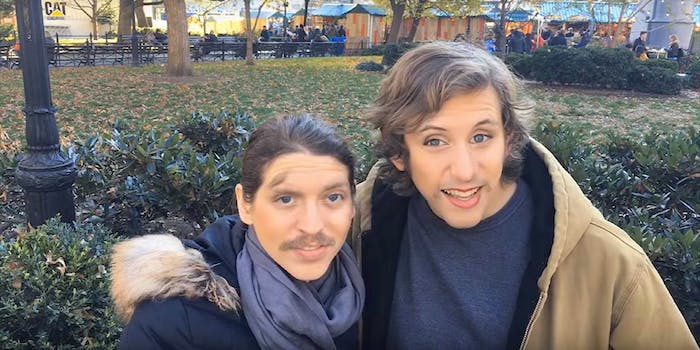 The face swap has become a time-honored tradition of Internet weirdness, and a new app lets you do it live, putting no wait time between the decision to do it and the feelings of regret that the results produce.

Most face-swapping apps—an inexplicable genre of its own—display still shots that places the eyes, nose, and mouth of one person on the face of another. The aptly named Face Swap Live from developer Laan Labs does the task in real time.

If we had to guess how it worked, we’d assume the app tapped into an alternate timeline in which everything about the world is exactly the same except you and your friend have each other’s faces. Luckily, we don’t have to guess, because that is undoubtably not how it works.

Face Swap Live taps into the camera on iOS devices to detect faces. From there, it maps out the face of each user and renders the swap in real time, tracking movement to keep the mixed up features in place on their new head.

Prior to the development of Face Swap Live, the only way to produce similar results was to undergo the experimental face transplant procedure depicted in the probably documentary Face/Off.

Beyond the live feed of face swapping, the app also allows you to put your face on pretty much any picture. You can search the Web for images of celebrities and other people who you can put your features on, then record videos or take photos of the monstrosity you created.

If you feel like playing Dr. Frankenstein, or you want a quick laugh with a friend who you’ll never be able to look directly into their eyes again after you see them on you, you can grab Face Swap Live for $0.99 from the App Store.