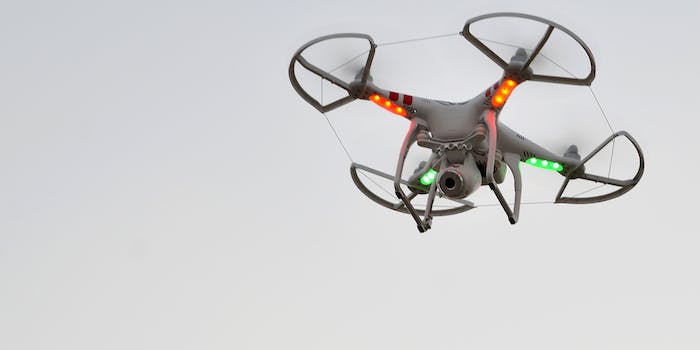 Are drones the future of advertising?

It’s a bird. It’s a plane. It’s a flying robot trying to sell you expensive jeans.

Last month, I attended a big outdoor music festival just outside of Austin, Texas. While the lineup featured indie rock heroes like Portugal. The Man and Grouplove, along with a blistering performance by Houston rap legend Bun B, there was one thing at the event guaranteed to instantly turn almost anyone in the audience’s attention away from the stage—a drone hovering just overhead.

Someone at the festival brought a small, helicopter-like drone into the air over and over again. Every time it happened, a sea of heads turned skyward to watch it do, well, not a whole lot really. Basically, it just hovered around for a few minutes at a time and then came back down. But, in each instance, the unmanned aerial vehicle was guaranteed to attract eyeballs.

If the past century of American-style capitalism has taught us anything, it’s that a space that attracts eyeballs is an advertising opportunity waiting to happen.

?DroneCast was started with a simple idea in mind: billboards, bus stations, and radio advertisements have become boring,” DroneCast’s Damien Kahmer explained. “People have become blind to this form of advertising, as it’s non-engaging and uninteresting. The question was, how can we fix this?”

For a price that can run from $2,000 all the way up to $50,000, DroneCast gives companies looking to advertise their products the ability to do so through the interest-inducing power of banners hung from drones.

Thus far, a lot of DroneCast’s business has come from industry conventions and expos. ?If two exhibitors in a convention were to be selling the exact same product, and one was advertising with traditional banners, and the other was using our system, it’s fairly obvious who is going to get noticed first,” Kahmer insisted.

Banners aren’t the only option offered by DroneCast. The company will also hang speakers from its drones to blast music or promotional messages. It recently got a commission from a client who wants to use its drones to drop artificial snow over a crowd. The sky is both the limit and the medium for what’s possible.

Even so, there are a couple fairly significant risks associated with the project. For one, Americans aren’t entirely comfortable with drones.

A public onion poll released earlier this month by insurance giant the Chubb Group found that nearly three-quarters of respondents were worried about an out-of-control drone doing property damage to their home, and more than half were concerned about people getting injured. Not only were privacy fears prevalent, but about a third said they were concerned about drone-assisted burglars stealing their possessions, which is apparently a thing people can be concerned about.

DroneCast insists it’s taking the utmost precautions to keep everyone safe when its drones are in the air, including requiring pilots receive more than 150 hours of flight training before going out in the field. However, there is another potentially thorny issue—legality.

In 2007, the Federal Aviation Administration instituted a ban on the commercial use of drones. While the agency has applied the ban to keep projects like Amazon’s much-hyped theoretical drone delivery service and journalistic efforts like surveying the aftermath of natural disasters grounded, the ban also applies to, you know, commercials.

This rule would seem to make DroneCast’s entire business model against the law, except that the actual legal status of the FAA’s ban is currently in a bit of a grey area. Earlier this year, a federal administrative law judge ruled that not only were the FAA’s rules absurdly broad, but the agency may not even have the authority to regulate drones in the first place.

While the FAA has appealed the ruling and currently stands by its prohibition, the team at DroneCast takes a view similar to the court.

?There is a huge discrepancy between what the FAA says and what is an actual enforceable law,” Kahmer explained. ?The FAA has guidelines in place but doesn’t have any enforceable regulations ?banning’ this tech.”

He adds that the company has been in touch with the FAA and is pushing the agency to come up with a workable set of regulations that makes commercial drone use clearly permitted while ensuring everyone’s safety, which is basically the FAA’s main concern when it comes to drones. Due to a congressional mandate, the agency has been working on just this type of permanent, formalized regulation for the better part of a decade, but the actual release of even a draft version of the new rules has been repeatedly delayed.

Opening up the skies to commercial drones is crucial for DroneCast because the company is looking to expand beyond simple advertising.

One idea is to create a health system where a user’s wearable registers their having a heart attack and a drone equipped with medical supplies is immediately dispatched to their location. Since every minute someone who has just had a heart attack has to wait to receive medical care decreases their chance of survival, a project like this has the potential to save some lives.

DroneCast has launched a crowdfunding campaign through Kickstarter to raise funds to get its health initiative off the ground. Kahmer says the company wants to diversify to the point where it becomes ?the Google of drones.”

The only problem with that lofty ambition is that, with its recently revealed testing of delivery drones in Australia, the ?Google of drones” may just end up being Google.