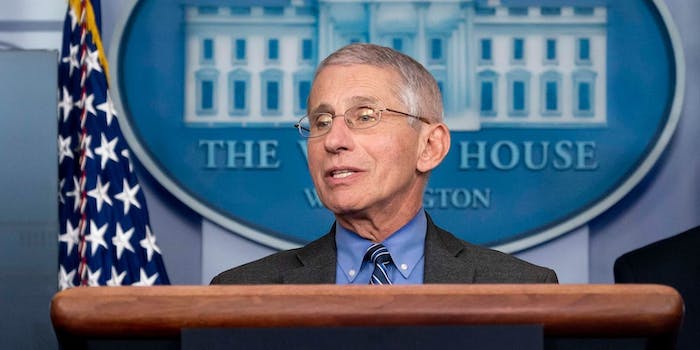 Someone is spreading a sketchy sexual assault claim against Dr. Fauci (updated)

The people behind it seem to not exist.

The coronavirus outbreak has made Dr. Anthony Fauci, longtime director of the National Institute of Allergy and Infectious Diseases, a household name.

As beloved as he is in some corners, Fauci is loathed in others. He has increasingly weathered attacks from conservatives and conspiracy theorists who disagree with his cautionary approach to the deadly virus and view him as a “deep state” enemy of President Donald Trump.

Last month, as the threats escalated, Fauci was assigned a security detail.

The latest attack on him comes in the form of an accusation of sexual assault.

Earlier this week, the Daily Dot received a press release from a woman claiming that Fauci sexually assaulted her in 2014. The release included the details of the allegation and said she and her representatives plan to hold a press conference on Tuesday in Washington, D.C.

All allegations of this nature are given equal consideration. But the more the Daily Dot looked into the details, the more things didn’t add up. The accuser didn’t respond to multiple requests to speak with her.

The woman, whose name is not reported here because it couldn’t be confirmed, claims to be represented by Rhonda Abramson and Richard Whitley of Whitley, Moran, Telander LLP. The Daily Dot could find no record of any business by that name.

The email, which came from the accuser’s Gmail, included Abramson’s LinkedIn account and phone number. There she claims to live in the Washington, D.C. area and to have worked for two companies.

Unlike Whitley, Moran, Telander, those companies’ existence was readily confirmed. However, both told the Daily Dot that they have no record of Abramson’s employment.

“We have never employed her, have never heard of her, and have been fielding calls and emails on this for a couple of days,” said Dave Seman, managing principal of Paladin Political Group, which Abramson claims to have worked at until last month. “We have requested LinkedIn flag her profile for fraud.”

A human resources representative at the second company, where Abramson claims to have worked from 2007 to 2011, said that the position she lists doesn’t exist.

Abramson herself seems to also not exist. Reverse image searches for her LinkedIn profile picture turn up nothing.

An initial search for her picture on Have They Faked Me was negative, but barely; a second search a day later was positive. This means either that fake photos have likely been made using this image, or that the image itself is fake.

Abramson did not respond to numerous messages via voicemail, text, and LinkedIn. All calls went to voicemail.

Although she’s not responding to inquiries, Abramson did find time to post the press conference details on LinkedIn yesterday.

Richard Whitley is similarly impossible to find. The Daily Dot found no one by that name, or any of the variations of Richard, in Washington, D.C on LinkedIn or Facebook.

Even the location of the press conference is strange. According to the assault allegation, it took place at the Four Seasons in Baltimore in 2014, which is on International Drive.

The address for the press conference is also given as an International Drive, but in Washington, D.C. That address most closely matches that of the Chinese Embassy.

However bizarre, it is possible this location was chosen because the coronavirus originated in China.

Given the nature of the allegation and his history, the Daily Dot contacted far-right pundit Jacob Wohl to ask if he knew anything about it. Wohl has previously been involved with leveling often far-fetched sexual allegations against various individuals Republicans consider their enemies: Sen. Elizabeth Warren (D-Mass.), Pete Buttigieg, and Robert Mueller. Each allegation was later resoundingly discredited.

Plus, sham press conferences in the D.C. area are kind of his thing.

Wohl said he had nothing to do with the accusation against Fauci.

He also said that his frequent co-conspirator and right-wing lobbyist Jack Burkman isn’t involved and that no one had contacted him with allegations against Fauci. Wohl said that he’s presently in California and has no plans to be in D.C. this Tuesday.

It’s beginning to seem unlikely that anyone, least of all Abramson or Whitley, will attend the press conference.

As of press time, Fauci had not responded to questions sent to the National Institute of Allergy and Infectious Diseases press office. This story will be updated if a response is received following publication.

UPDATE 1:28pm CT, April 21: Wohl and Burkman were on today’s press conference call. They claimed to have got in touch with Abramson via LinkedIn after the Daily Dot contacted them, after which they were asked to participate due to their being “preeminent subject matter experts” in the field of MeToo, according to someone who said he was Whitley.

Neither they, the alleged victim, nor “Whitley” could account for the fact that none of the parties appears to exist. Further, none could explain why the details recounted today differ significantly from key points of fact alleged in the release. They also claimed the Chinese government invited them to have the press conference at the embassy.

Burkman promised to send information that would corroborate their identities and the facts alleged. Thus far, he has not.