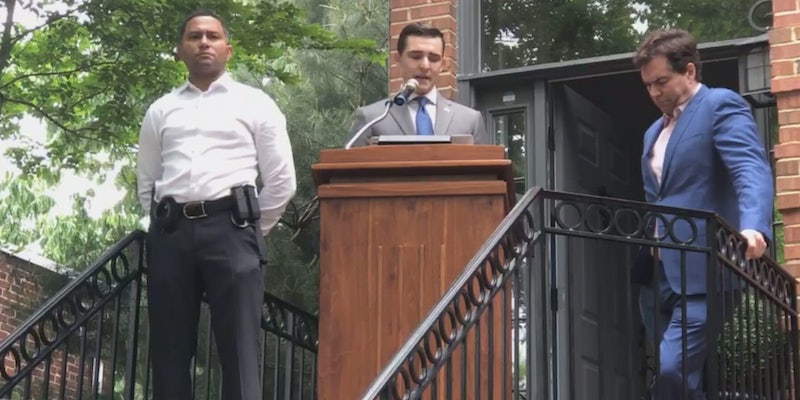 Wohl's attempt to defend his Buttigieg smear was derailed.

On Wednesday, the conspiracy theorist without any solid theories, Jack Burkman, held a “press conference” at his house, just on the other side of the Potomac River from Washington, D.C.

Burkman was joined by Jacob Wohl, his partner in crime and perhaps the most famous idiot to grace the internet in the Trump-era.

Burkman and Wohl promised to unveil proof that presidential candidate Pete Buttigieg committed sexual assault. Last week, the pair attempted to frame Buttigieg, but their sham was discovered in less than a day.

The Daily Dot has covered the failings of Burkman and Wohl for about a year. Burkman — who promotes himself as a lobbyist — is something of a punchline in Washington but only in certain circles twice or thrice removed from the actual conversations of the city.

And these “press conferences” are his preferred mode of misinformation. Last July, he tried to reveal huge news on Seth Rich but fell flat on his face. In November, he—teamed up with Wohl—tried to frame Robert Mueller for sexual assault. The duo was laughed out of the room. As an added punch-line, Burkman’s fly was down while he and Wohl addressed the press.

And Burkman’s early May conference failed before it even got off the ground. A supposed protest against the event was quickly traced back to Wohl’s email address by Mediaite. Burkman linked to the fake Eventbrite page on Twitter, writing “hundreds of leftist protestors are set to descend on our Wednesday Press conference.”

The page was taken down after Mediaite’s story but Burkman’s tweet remained.

But, still, the press conference trudged along with Burkman promising devastating information to back up his case. He claimed to have footage from the Mayflower Hotel in Washington D.C. that backs up his (and Wohl’s) claim that Buttigieg sexually assaulted a victim, Hunter Kelly. Kelly has already come forward to say that they are lying.

Burkman’s previous press conferences have been held at a Holiday Inn nearby, but Wednesday’s event was held at his red brick house in Arlington. He and Wohl stood at the top of the steps behind a podium and spoke into a microphone hooked up to a speaker. There were a handful of reporters gathered with a few boxes of Dunkin’ Donuts provided by Wohl and Burkman.

The duo presented travel records that they claimed proved Buttigieg was at the Mayflower Hotel. These were shown on a television screen at the bottom of the steps and appeared to be FEC records. However, the screenshot was isolated so that reporters couldn’t tell which candidate they were from. And given the Burkman/Wohl history, it could have been entirely falsified.

Wohl and Burkman attempted to defend their Buttigieg smear by saying that Kelly wasn’t coerced into working with them and that he was being truthful.

For the past week, the two have claimed Kelly is only denying the allegation now because people forced him to change his story. On a few occasions, they took swats at The Daily Beast reporter who broke the story about their scam.

As proof, they offered a surreptitiously recorded video featuring Kelly. The video showed Kelly sitting at a table, looking at a computer. The hoaxsters claimed that he was fielding questions from journalists during the clip, but didn’t offer any evidence to support that context.

Just before the press conference, Hunter Kelly issued a statement, calling Burkman and Wohl “chronic liars” and “fraudsters.” He said that he was in Michigan but “wished he could be there to see the embarrassment that is going to take place.”

Buttigieg’s team declined to comment on the presser when reached by The Daily Dot.

Moving beyond Buttigieg, Burkman and Wohl announced that they intend to vet all the 2020 Democrats, and offer them “the Wohl/Burkman seal of approval” — they said that Bernie Sanders is the only candidate who currently carries that honor. Burkman declared “we want you to think of this home as the center for election 2020.”

And they hinted that they’ve been looking into some of those candidates. For Sen. Elizabeth Warren (D-Mass.), they seemed to suggest they will prop something up based on her history claiming she has Native American heritage, which has already been covered extensively. For former Vice President Joe Biden, they suggested he may have health issues.

At one point, the press conference became an unintentional parody of itself as Burkman’s trash was loudly hauled away from the curb, drowning out the sound of his voice.

When they opened questions to the press, nobody seemed quite sure what to ask. All the gathered reporters were well aware of the joke and our role in it was mostly to observe it. I asked if their previous scam investigations (they claim, among other things that Rep. Ilhan Omar (D-Minn.) has married her brother) are still underway.

Burkman told me that their Omar probe continues but that they’ve concluded their Mueller investigation. When I asked what the final verdict of that investigation was, he said “we’re not commenting on that—that’s not our purpose today. We’re not going back a year in the past.”

For the reporters and the internet watching via live streams, the press conference was exactly what we hoped for.

Like a pro wrestling show, we know that Burkman and Wohl’s schemes are fake. Questioning their veracity doesn’t yield any rewards. Instead, it’s best to treat them as the carnival acts that they are. And in that sense, the pair put on an enjoyable performance.