How far the (not) mighty have fallen.

On Sept. 17, the Daily Dot received an email from [email protected] alerting us to a press conference held by Jack Burkman and Jacob Wohl at Burkman’s Arlington, Virginia, house on Sept. 23 at noon.

It was the same physical address that Burkman and Wohl held their botched Pete Buttigieg press conference, which was covered in May.

The email, which we’ve included below in its entirety, claimed that Burkman was going to detail crimes committed by former FBI analyst Mark Tolson who hacked his online accounts.

Tolson was a former FBI analyst whose wife worked for Burkman. He pled guilty to the charges recently that he snooped on Burkman, using passwords his wife provided.

Burkman’s claim is almost certainly nonsense: He says Tolson’s crime was part of a sweeping government-mandated crackdown on conservatives.

In the email, Burkman writes that a former colleague of Tolson’s “has come forward claiming that last week’s revelations were just the tip of the iceberg.” And Burkman even decided to make it juicy, claiming “according to the informant, some of the stolen information included deeply personal correspondences and explicit photos.”

We were more interested in showing up for the spectacle and to ask Jacob Wohl about his October court date and his upcoming debate with anti-Semite Nick Fuentes.

But when theDaily Dot showed up at Burkman’s house, there was nobody there—the garage was open and Burkman’s compact SUV was parked beside a wooden canoe with its better days behind it. 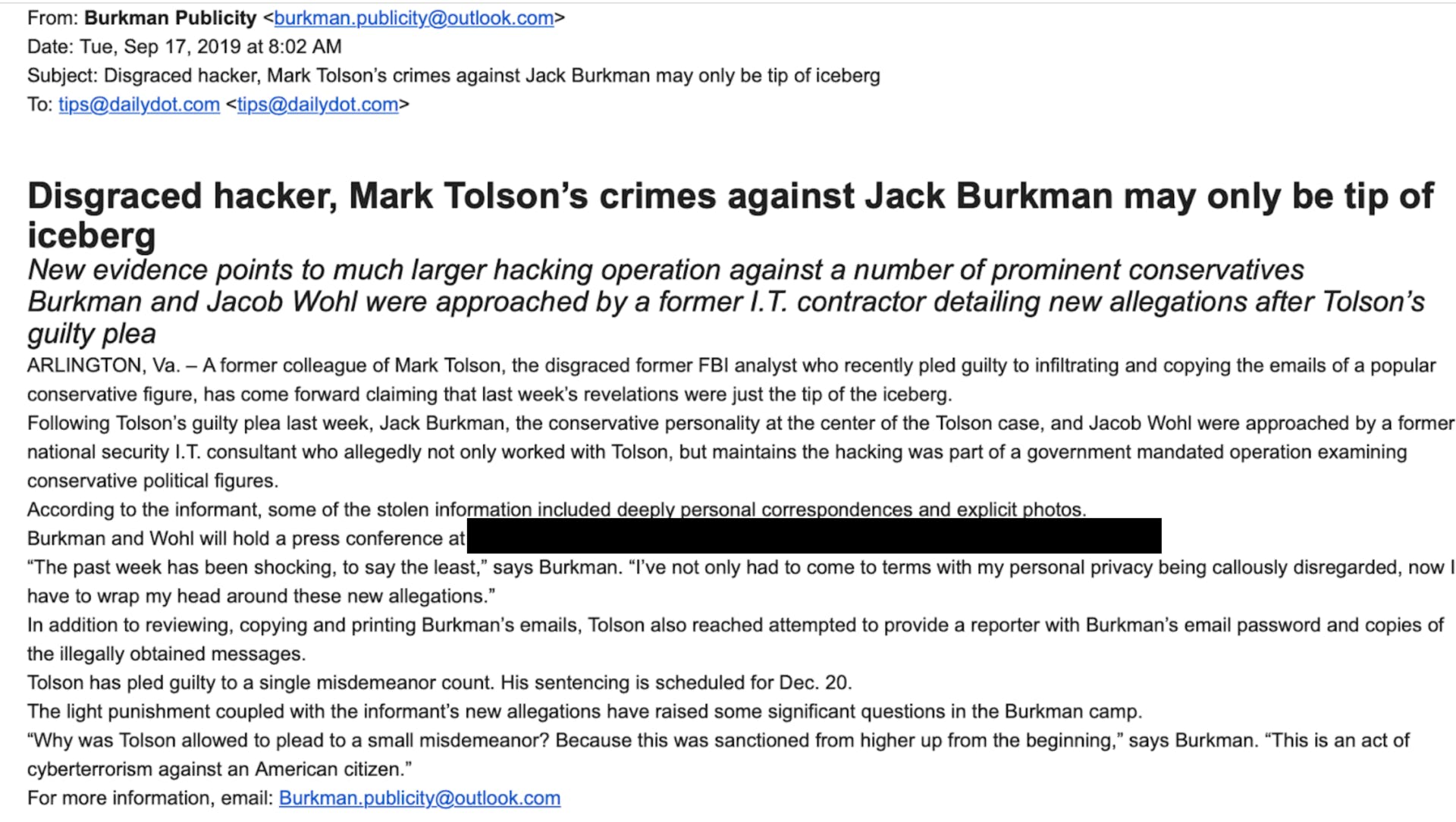 When we knocked on the door, Burkman answered in a T-shirt and holding a coffee mug and said, “there’s nothing today, sorry.” When we mentioned the email, he said “it’s the wrong date,” saying later “it’s not scheduled yet.”

Asked if the email came from him and if they actually botched this as spectacularly as it seemed, Burkman told the Daily Dot, “I can’t comment.”

A few minutes later, Burkman rushed outside into a cab and again refused to tell us if the email came from him and if he, somehow, had forgotten that he scheduled a press conference.

He also threatened to call the Arlington police.

Burkman also later did not answer another request for comment about his claims against the government.

Burkman used to hold his press conferences at a nearby Holiday Inn. But the last such event he held there was in November. At that time, he and Wohl claimed to have information on a woman who had been sexually assaulted by Robert Mueller.

That presser attracted mainstream media attention; however, it crumbled spectacularly when they couldn’t answer basic questions and the press heckled the duo out of the room. Since then, they’ve embraced their roles as online buffoons who hatch schemes with the competence of the Three Stooges.

When we reached Jacob Wohl via phone, he said that he wasn’t aware of any press conference that the pair had planned. He also said that they are working on an investigation—which is the way in which they categorize their bastardized smear campaigns—on Mark Tolson. Wohl also said that Burkman handles all of the media outreach for their press conferences.

Other reporters that we spoke with told us that they also received the email, they also noted that previous press conferences that Wohl and Burkman have put on came from the same email address. For example, the announcement of their Buttigieg press conference came from [email protected], as did the outreach they did for a presser at the Conservative Political Action Conference.

But on Thursday, our inboxes pinged again with another email from that address.

Burkman and Wohl claim that they were offering $50,000 for information about the whistleblower who came forward to shed light on Donald Trump’s call with the Ukrianian president.

In the Thursday email, there were even quotes from Burkman, including him declaring “the situation in our nation’s capital is a national disgrace.” Burkman also tweeted that he was offering a $50,000 reward for information leading to the unmasking of the whistleblower.

Ironically, Burkman and Wohl’s case against Mark Tolson might be the first semi-legitimate scheme they’ve stumbled upon, even if they completely botched the roll-out.

Tolson has admitted to hacking Burkman’s email account and trying to farm out his emails to reporters, though his plan fell apart. Tolson’s wife worked for Burkman and had access to his email account and Tolson resigned from the FBI and is set to be sentenced in December.

When asked about the case, Jack Burkman told the Washington Post, “I feel sorry for his family. Let’s hope there is significant jail time here.”

When the Daily Dot reached Tolson’s lawyer, he said “I don’t know Mr. Burkman at all,” and declined to comment further.