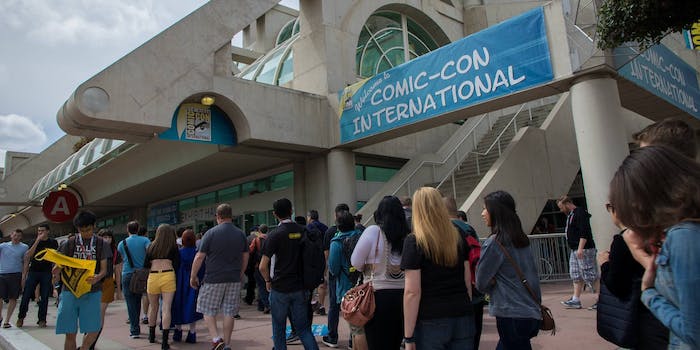 San Diego Comic-Con got canceled due to the coronavirus

Badge holders can request a refund or transfer their badges to SDCC 2021.

San Diego Comic-Con, one of the biggest fan conventions in the world, has been canceled due to concern over the COVID-19 pandemic.

It’s the first time in the convention’s 50-year history that SDCC—which brings around 135,000 attendees to the San Diego Convention Center over a five-day period—isn’t being held. Comic-Con, the organization behind SDCC and WonderCon (which would’ve taken place April 10-12), already canceled the latter convention last month. Renovations on Balboa Park’s Federal Building for the Comic-Con Museum have also delayed the museum’s planned summer 2021 opening.

The organizers cited recent statements from California Governor Gavin Newsom and assessments of the situation as having led to the decision to cancel.

“Extraordinary times require extraordinary measures and while we are saddened to take this action, we know it is the right decision,” Comic-Con spokesperson David Glanzer said in a statement. “We eagerly look forward to the time when we can all meet again and share in the community we all love and enjoy.”

Earlier this week, Glanzer told the San Diego Union-Tribune that there may be an online component to SDCC, but details about that potential online component have yet to be released; the press release sent out on Friday also doesn’t touch on the Eisner Awards, which are typically held during SDCC.

Anyone with an SDCC 2020 badge—both regular badge holders and exhibitors—can either request a refund or transfer their badges to SDCC 2021, which will be held July 22-25, 2021. Hotel room reservations made through onPeak (the SDCC hotel affiliate) will also be canceled and deposits refunded.

The decision to cancel SDCC arrives several months before SDCC’s scheduled dates, and Comic-Con cited concerns about the financial cost and potential loss of income for attendees and exhibitors as to why it had hoped to delay the cancellation of SDCC.

But the cancellation also arrived after Comic-Con released an update at the beginning of April voicing hope that SDCC 2020 would happen, a statement that was widely derided at the time for the unnecessary risk of further spreading COVID-19 by allowing more than 135,000 people gather in a vastly crowded convention center for five days. And that’s assuming that studios, networks, and publishers whose products make up part of SDCC’s programming, even felt safe enough to send their employees and talent to SDCC to participate.

We’re several months away from July, but as the number of COVID-19 cases continues to rise in the U.S., canceling SDCC became an inevitability.