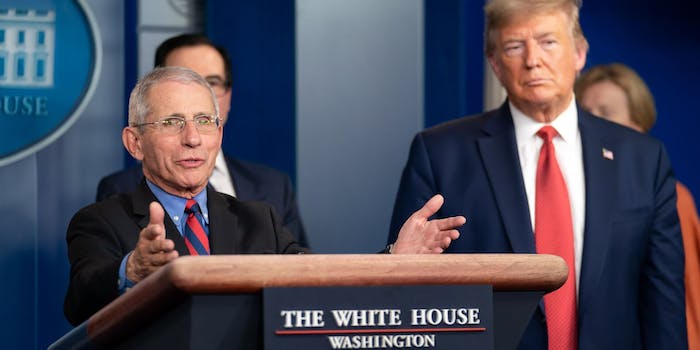 They think he is working with Hillary Clinton to tank the economy and make Trump look bad.

Right-wing conspiracy theorists are trying to undermine Dr. Anthony Fauci and his coronavirus assessments by alleging he is working with Hillary Clinton, against President Donald Trump.

Fauci, the director of the National Institute of Allergy and Infectious Diseases who is tasked with managing the coronavirus crisis, is known for his repeated warnings about COVID-19 and for his (very relatable) facepalm in response to Trump’s deep state joke he recently made at a press conference. Fauci is highly respected among both sides of the aisle and often dubbed the nation’s leading expert in infectious diseases.

In the tweets, one user alleges Fauci is “deep state” and another argues that as soon as Fauci took the podium at a press conference, the “market tanked.”

One of the main Fauci opponents peddling these theories is right-wing broadcaster Bill Mitchell, who, on one instance, hate-tweeted about Fauci 36 times in 30 minutes, according to BuzzFeed News.

The 2009 influenza killed over 12,000 people in the U.S. and 284,000 globally, with a death rate of 0.02%. The coronavirus has already killed more than 1,000 people in the U.S. since the first case was reported in January and currently has a death rate of 0.4%. Those statistics alone likely prove why Fauci appears to be more uneasy about the coronavirus.

Mitchell also isn’t shying away from exploiting the current pandemic panic. He claimed he is “fighting against the lies and hype” surrounding the coronavirus “24/7” before plugging in his personal GoFundMe.