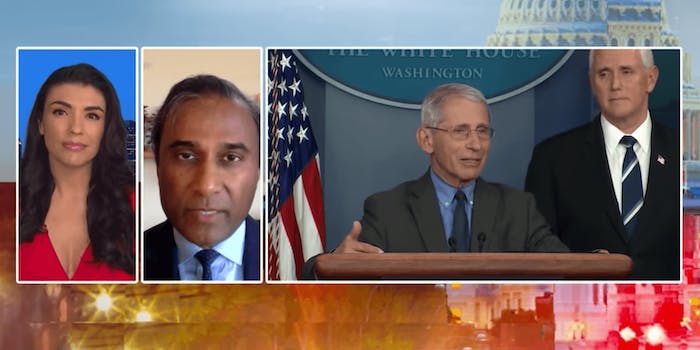 The video is still up.

A YouTube video that accuses Dr. Anthony Fauci of being a member of the “Deep State” has been viewed over 6.5 million times so far.

Ayyadurai is another member of the right to perpetuate the deep state conspiracy theory, which believes secret groups in the government are working to undermine President Donald Trump. Far-right pundits now think Dr. Fauci is part of it. They’re spreading #FireFauci on Twitter as a result.

“You’re talking about a guy who’s embedded into the deep state and he’s your typical example of the worst of the modern scientific establishment,” Ayyadurai said in the YouTube video.

Despite YouTube’s commitment to limiting the spread of disinformation surrounding coronavirus, the platform says the video went viral due to external sites, according to BuzzFeed.

As of this writing, the video is still up.

Dr. Fauci is the head of the National Institute of Allergy and Infectious Diseases and typically makes an appearance at President Donald Trump’s coronavirus briefings.

In Ayyadurai’s opinion, Dr. Fauci dedicated his decades in the scientific community to bolstering the pharmaceutical industry. He says waiting for a vaccine only helps “Big Pharma.”

Ayyadurai said the cure to the coronavirus is vitamin C.

No science exists to support this claim. Experts at the World Health Organization continue to say there are not any known cures to the virus yet.

This is not the first time Ayyadurai has taken shots at Dr. Fauci.

He isn’t alone. Other deep state believers tweeted #FireFauci too.

Even Trump retweeted a #FireFauci tweet this week. Reporters questioned the retweet at a briefing on Monday.

“Trump on why he retweeted a #FireFauci tweet: ‘I retweeted somebody — I dunno.'” journalist Aaron Rupar tweeted.

Ayyadurai is also part of the crowd that wants to send the healthy back to work. Again, the WHO, among many other experts, say social distancing is the best mitigation until a vaccine is available.

Regardless of evidence from the scientific community, Ayyadurai said the coronavirus is the fault of the deep state. In addition to impeachment, the coronavirus response was another way to undermine the president, according to Ayyadurai.

“I think the deep state’s real effect was to hit (Trump) with this coronavirus,” he said in the video.