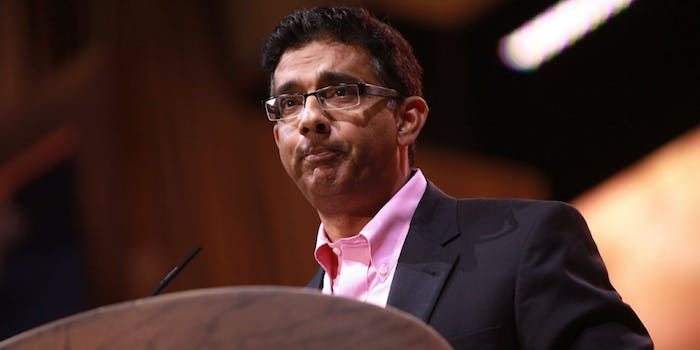 Can you guess who D'Souza blamed?

A month after President Donald Trump pardoned Dinesh D’Souza, the conservative flamethrower retweeted a tweet with the hashtag #burnthejews on Friday. D’Souza later claimed it was accidental—he said he was only sharing a trailer of his new film Death of a Nation— but the internet certainly noticed.

D’Souza wrote, “I did not see the [#burnthejews] hashtag. Just trying to share the trailer on social media.” But another Twitter user noticed he had retweeted another tweet with the hashtag #bringbackslavery.

And the internet was outraged but hardly surprised. D’Souza, after all, has defended Hitler, calling him NOT anti-gay, and recently, he mocked the survivors of the Parkland shooting. The internet let him have it.

Pardoned or not, you're just a piece of human garbage – and your legacy will reflect that in the history books.

I understand the mistake. That hashtag is so commonly used…🙄

You know when the “burn the Jews” people like your work you *might* be on the wrong side of history. That said you were pardoned by Donald J Trump, thrice married adulterer who owns the libs by putting babies in jail soooooo

Dude how could you Nazi that?

Even comedian Kathy Griffin got in on the act.

Dinesh D’Souza says he did Nazi that someone used the hashtag #burnthejews in a tweet he retweeted. https://t.co/TAvXnvL36u

Last month, D’Souza became the fifth person to be pardoned by Trump, who said D’Souza “was treated very unfairly by our government!” Yet, in 2014, D’Souza pleaded guilty to campaign finance fraud after he was caught funneling two $10,000 payments to the Senate campaign of a friend who was running in New York.

More from the Daily Dot:

In doing so he had violated the Federal Election Campaign Act, which limited individual citizen donations to any one political candidate at $5,000. During his trial, he admitted that he was fully aware that what he was doing was illegal and was sentenced to five years of probation. He was also required to pay a $30,000 fine and perform community service.

D’Souza also once called President Barack Obama a “boy” from the “ghetto,” and he called civil rights hero Rosa Parks an “overrated Democrat,” writing, “So Rosa Parks wouldn’t sit in the back of the bus—that’s all she did, so what’s the big fuss?”

As for the outrage to his retweet, D’Souza blamed “the leftists.”

Watch these sleazy, unscrupulous leftists try to make a story out of an accidental retweet @RawStory https://t.co/q5tNsuxdPc