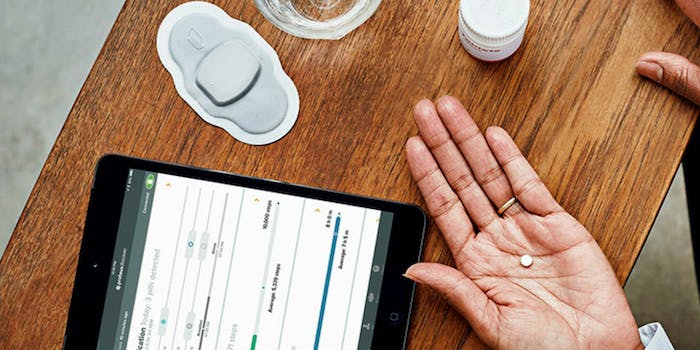 It uses Bluetooth to send data to a smartphone app.

You didn’t swallow your sensor today, did you? That’s how a conversation with your angry doctor could start in the near future.

The Food and Drug Administration on Monday approved the first “digital pill” in the U.S. that uses sand-grain-sized embedded sensors to track when a patient takes their medication. The pill, called Abilify MyCite, sends information to a patch patients wear on the left side of their rib cage, which then transmits data to a smartphone app.

The sensor, made of copper, magnesium, and silicon—safe ingredients found in foods—triggers an electrical signal when touched by acid. A few minutes after ingestion, the pill contacts stomach acid and sends a signal to the Band-Aid-like patch. The patch then transmits time and dosage information to a smartphone app using standard Bluetooth protocol.

Privacy groups are concerned the pills will be used to punish patients who don’t take them, while others question why the first approved pill is used to treat patients with schizophrenia who can become paranoid about doctors.

“You would think that, whether in psychiatry or general medicine, drugs for almost any other condition would be a better place to start than a drug for schizophrenia,” Dr. Paul Appelbaum, director of law, ethics, and psychiatry at Columbia University, told the New York Times.

Patients can sign consent forms to allow doctors and four other people, like caretakers or family members, to receive a time log of when they take their medication. The hope is that the pill will solve problems with patients not taking their medications, which the IMS Institute estimates costs the industry more than $200 million each year.

Abilify MyCite is a collaboration between the company that makes the medicine, Otsuka, and the sensor creator Proteus Digital Health. Abilify is used to treat schizophrenia, bipolar disorder, and severe depression.