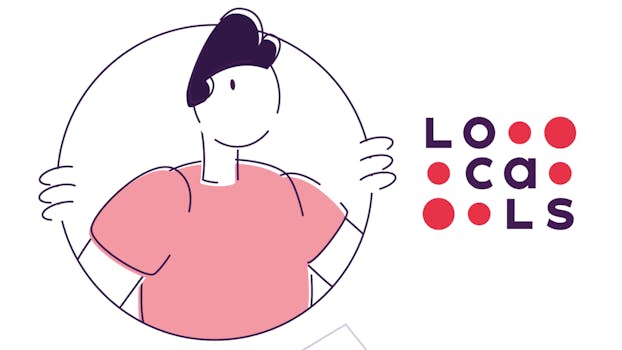 There are no hot nearby singles on locals dot com, just Andy Ngo, the Dilbert Guy, and Q fans.

What’s a site full of provocateurs when there’s no one to provoke? How do you raise your profile without the free publicity getting “canceled” provides? Libertarian comedian and intellectual dark web gadfly Dave Rubin attempts to answer those questions with locals.com, his crowdfunding/social networking platform with the deceptively bland name.

The Rubin Report host was inspired to create his own platform after Patreon banned former UKIP member and gamergate troll Carl Benjamin, aka Sargon of Akkad, from its site in 2018 for using the N-word in a YouTube video. Rubin interpreted Patreon’s aversion to doing business with racists for an outright assault and free speech. But on a more practical note, Rubin made just under $10,000 per month from his Patreon and needed to protect his income should the crowdfunding site decide to stop doing business with a dude who rubs elbows and hosts interviews with those same racists.

In 2019, Rubin and Jordan Peterson announced they were launching a far-right friendly competitor to Patreon to valiantly defend free speech, and more importantly, the profitability of said speech. Peterson and Rubin launched the underwhelming site Thinkspot in 2019 and it’s been relatievly unheard from since (possibly due to Peterson being incapacitated for the better part of a year). But in 2020, Rubin and co-founder Assaf Lev were able to pull in a fundraising round of just over $1,000,000 from 10 investors for locals.

So how’s the million-dollar site doing these days?

On its homepage, locals.com bills itself as a place where you can “support your favorite creators,” “access their exclusive content,” and “join communities of independent thinkers and like minded people.” It’s also a place where content creators and aspiring influencers can cultivate a “subscription based income stream without fear of censorship or deplatforming.” Locals is a place where you can find your people, assuming your people espouse insidious conspiracy theories about George Soros.

The name “locals” sounds like a platonic Adult Friend Finder-type site, if one of the  friends you were looking to find was, for example, a self-described “wife, mother, Silicon Valley Chief Executive Officer, Start-up Founder, Entrepreneur, Global Human Resources Consultant, Non-Profit Board Member & Advisor, Non-Fiction Author, and generally concerned citizen” posting under the name Game Theory Politics who claims to have “diligently followed Q since 2017” and is a true believer. She claims to have authored several books on game theory and her feed consists of Q memes.

“True Q researchers and followers are God fearing patriots who want to see equal justice under the law – and worldwide child trafficking networks dismantled,” Game Theory politics writes in an essay-length response to another user who commented on her page. She adds: “We are not a cult – nor do we worship President Trump or Q. We are digital soldiers preserving our constitution and the promise of America.”

In other words, it’s a safe space for self-styled provocateurs, conspiracy theorists, and free speech warriors who claim to despise safe spaces.

In fact, Donald Trump Jr., who wrote a whole book about being “Triggered,” used locals to promote it.

Locals is ambitious in the sense that its users want to build or maintain a niche fame, but sidestep the scrutiny and accountability that typically accompanies notoriety. On its face, it seems most attractive to the Dave Rubins and Dilbert Guys of the world who already have large followings and want to protect the bag in the wake of YouTube, PayPal, or other Silicon Valley platforms deciding to boot them after say, hosting interviews with white supremacists and amateur phrenologists. Reviled friend to fascists everywhere Andy Ngo maintains his own locals community called the NGO-GO ZONE and boasts over 4,000 members. For a minimum of $5 per month, you can view subscriber-only content and mix it up with the kind of people who would gladly pay actual money for Ngo’s far-right agitprop. A bargain at any price.

On his locals community page, Coffee with Scott Adams, the Dilbert Guy isn’t giving anything away for free. If you want to see videos of the little fireside chats Adams live streams on Periscope every day, it’s gonna cost you at least $7 a month. Of course, you can always give more. In fact, Adams insists it’s to your benefit to give as much as possible.

“The more support I get, the harder I work. I couldn’t turn off that reflex if I tried,” Adams explains in his subscriber page. “So if you want to inexpensively manipulate me into doing better work for your selfish pleasure, this is the place to do it. Thank you in advance.” If the content is bad, it’s your fault for not donating more. Open that wallet, chief, and let Adams school you on “the topics of persuasion, presidential politics, the nature of reality, life improvement, and anything else that is useful or makes you feel good.” Just in case you were wondering if Adams’ motivations were anything less than altruistic, he adds: “ Sometimes I learn things just to tell you about them.”

He also, though, uploads a great number of the videos to Twitter, so you can just as easily get them for free.

Another thriving locals content creator is lifestyle influencer Classically Abby, aka Ben Shapiro’s more telegenic sister. “Who am I?” asks Classically Abby’s locals About page.  “I’m a trained opera singer (with three degrees in operatic performance), a lover of all things fashion, a self-taught makeup artist, and a wife to a wonderful husband.” She continues: “So why did I choose the name Classically Abby? Because I’m a classic kind of girl.” Classic as in “retro,” “throwback,” “from another time,” etc. We can read between the lines.  “A nude lip and a cat-eye never go out of style, and a flared skirt always looks great with a fun pair of heels,” Abby writes. “ I’ll almost always choose a fancy outfit over a comfy one, and I think that wearing something less revealing leaves more to the imagination.”

Classically Abby is building a brand as a right-wing Goop, hosting chatty videos ranging from beauty, skincare, and fashion to pro-life screeds, all delivered in the same sing-song voice. Sometimes she finds an excuse to bust out her operatic chops. For a minimum of $10 a month, you can join the Classic Crew and get intimately acquainted with this Gen Z Phyllis Schlafly by way of Gwyneth Paltrow. “I like cooking my husband dinner and I love being married,” Abby promises in her About page. “ I have classic political views and I’m not afraid to share them.” All those “classic political views” can be yours for just $120 a year.

One of the most curious content creators is Robert (@EscapeMasters,)  a motivational speaker who looks like Lindsey Graham if the senator managed a bowling alley. With his Tony Robbins’ energy and affinity for gesticulating, Robert was born to lead a three-day multi-level marketing seminar in the multi-purpose room of a Holiday Inn off Rte. 70 in South Jersey. Robert is practically puking with excitement over mentoring you into your first million, but first, he wants to “help you overcome limiting beliefs and escape your current situation and mindset to a life of freedom and happiness.” Freeing yourself from “all the self-limiting beliefs holding you back” will run you at least $7 per month. Should you feel any reservations about giving Robert your hard-earned cash, make sure to watch the video where he’s wearing a busy Hawaiian shirt with the third or fourth button undone while he sits in front of a collection of trophies and congratulates you “for making an incredible decision” in subscribing to his content. Giving this guy your money is an incredible decision, indeed.

Not everyone on the platform is an outward creep, wackadoodle, reactionary, or grifter. Some people genuinely want to build communities around their art, like the Canadian couple who runs a Prairie Home Companion-style musical podcast or the dude who posts excerpts of his sci-fi novel in progress. Creators of all stripes share the podcasts, videos, and blog posts they produce, but it’s hard to see how anyone who didn’t already have a following prior to locals builds one on the platform. As a social networking site, it’s difficult to navigate and the user experience doesn’t lend itself to discovery. Plus, the site doesn’t seem like it gets a lot of eyeballs on it to begin with. According to SimilarWeb’s analytics, locals got about 555,000 visitors in August compared to Patreon’s 77.7 million visits. For comparison’s sake, Parler, the free speech warriors’ answer to Twitter got 5.82 million visits in August. It seems like locals is hosting mostly tumbleweeds. Perhaps that’s just what happens when you create a safe space for people tired of defending their beliefs but are unwilling to examine why those beliefs require constant defending.

Maggie Serota has written for SPIN, Billboard, Esquire, Pitchfork, among other places. She lives in Queens with an absurdly charming cat named Cosmo.