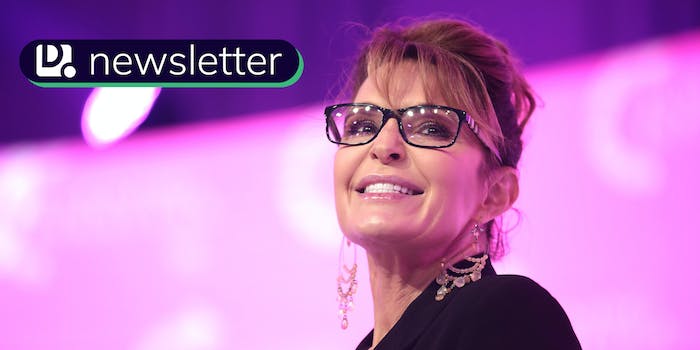 Today we’ve got some key reports (including an exclusive scoop!) about fundraising for Trump’s border wall, Google Maps getting into the Roe v. Wade discourse, and an analysis of how the new Doctor Strange movie fails its main female character.

Plus, our Politics Reporter Claire dives into the social media history of someone you’ll definitely recognize in her weekly “Dirty Delete” column.

FAR-RIGHT: Our Politics Editor David Covucci has a scoop: Emails obtained by the Daily Dot reveal that a Border Patrol employee gave money to the GoFundMe for Trump’s border wall. That fundraising attempt, you might remember, was aided by Steve Bannon, Kris Kobach, and started by Brian Kolfage. It eventually led to indictments, guilty pleas, and presidential pardons.

BIG TECH: Google Maps was thrust into the fight over Roe v. Wade this week after Twitter users discovered that Supreme Court Justice Brett Kavanaugh’s house was blurred on the service. Our Tech Reporter Mikael digs into the discourse about the blurred home and the wider discussion about protesting outside people’s homes.

MCU: Our Culture Reporter Gavia has a great analysis on how Doctor Strange in the Multiverse of Madness failed Scarlet Witch by telling yet another sexist Marvel story. Gavia also reviewed the latest Marvel Cinematic Universe film, which you can read here. (Her analysis does contain spoilers for the film, so there’s the obligatory spoiler warning). You can check out her latest analysis here.

Sarah Palin was a meme before memes were really a thing

Sarah Palin is almost impossible to satirize. It’s not that you can’t make fun of her, it’s just that she’s a living, breathing parody of herself.

Tina Fey arguably had the easiest job on Saturday Night Live when Palin was John McCain’s running mate in the 2008 presidential election. Lorne Michaels was probably like, “Just play it straight, Tina. They’ll laugh. I promise.”

Palin, who’s now running to be Alaska’s sole member of the House, was a meme before being a meme was a thing.

Naturally, Palin’s transition to the internet has been a wild ride.

Though her views are as fringe as her bangs, you won’t find her on the likes of Gab and Parler.

But no matter where she goes in person or online, Palin finds a way to bring her own quirky-meets-cringe, alt-right vibe. Once she (presumably) unwittingly tweeted a white supremacist slogan. Another time she was accused of a racist dog whistle for referring to then-President Barack Obama’s “shuck and jive.”

She’s also known to get into bizarre feuds, like when she had a Facebook war with People for the Ethical Treatment of Animals (PETA) that we described at the time as “so dumb, it should be considered inhumane.”

In some ways, Palin was ahead of her time, and not just because of those on-trend glasses.

For one, Palin started triggering liberals online a decade ago when she bragged about participating in “Chick-Fil-A Appreciation Day,” Mike Huckabee’s homophobic idea to protest gay marriage by eating at the fast food chain notorious for funding anti-LGBTQ causes. She’s also been passive aggressive on social media since before subtweeting was a thing.

Years ago, Palin posted a YouTube video about “the awakening” and tweeted about “the storm,” parlance that would later become obsessions of QAnon conspiracy theorists.

Unlike most politicians, Sarah Palin is always willing to speak her mind, even if what she has to say doesn’t make a lick of sense.

You could say she blazed the trail now trod by the likes of Rep. Lauren Boebert (R-Colo.), which could explain the soft spot Palin has for her.

Sarah Palin may be many things: misinformed, misunderstood, mistaken. But she’s definitely entertaining. That doesn’t mean she’d make a good congresswoman, of course, though her campaign will undoubtedly feature some memorable moments. You betcha.

No matter how she fares in the election, pray that she never gives a repeat performance of this crime against Sir-Mix-a-Lot.

These credit cards come with a $200 bonus

Insanely high-paying cashback credit cards have hit the market, and Wise Bread is here to help you find the right one. Find out which credit cards will offer you a $200 bonus, plus high ongoing cashback rates, no annual fee, or 0% interest until 2023, so you can start racking up these huge cash-back rewards today!

😳 A woman says that a man attempted to record her without her consent while they were kissing at his home and then blocked the door and prevented her from leaving in a viral video.

👜 A TikToker is calling out a vintage store in Chicago for allegedly selling her a fake Coach purse.

🚽 If you go to the bathroom “just because,” you may want to listen to this doctor who is going viral on TikTok. Her videos explain why that can be harmful, or as says, she’s “just out her trying to save your bladder.”

🥤 This award-winning, minimalist seltzer maker is a dream come true for every seltzer addict.*

🍔 A TikToker says in a viral video that she waited 45 minutes to get her food at Sonic, and the claim sparked a debate among viewers as fast-food restaurants in the U.S. face labor shortages.

🏀 The Daily Dot’s ‘Presser‘ vertical looks at the intersection of race and sports online. Their latest article says “It’s time to abolish the NBA draft.”

🧇 After a Waffle House worker walked out on the job, customers in the restaurant stepped in to make their own food, a viral video alleges.

🍕 A Papa John’s worker chronicled the wait for a $70 order with no tip to be picked up by a DoorDash driver.