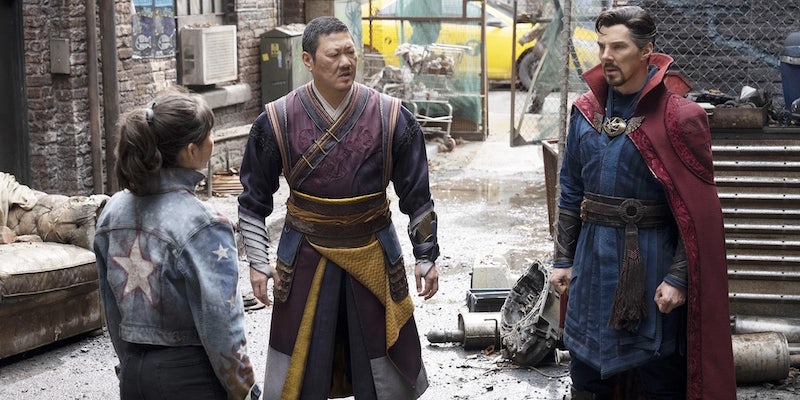 Doctor Strange in the Multiverse of Madness/Disney

With a deceptively sexist role for Scarlet Witch, this messy, overstuffed film has no respect for its characters—or its audience.

If I got paid millions of dollars to star in movies where my performance was essentially irrelevant, I might half-ass my job as well. In Doctor Strange in the Multiverse of Madness, a film largely disinterested in developing its title character, Benedict Cumberbatch smirks his way through cheap quips and waves his hands in front of a green screen. Elizabeth Olsen gets more dramatic material as Wanda Maximoff/Scarlet Witch, but both she and MCU newcomer America Chavez (Xochitl Gomez) are defined by the tiresome trope of magical women who are Just Too Powerful For Their Own Good. Together, they’re trapped in a movie that’s more invested in the concept of a multiverse than telling an engaging story.

Doctor Strange in the Multiverse of Madness

Release Date: May 6, 2022
Director: Sam Raimi
Release: Theatrical
Benedict Cumberbatch stars in this messy, thematically vacant Marvel spinoff, where Doctor Strange faces up against Scarlet Witch for a multiversal battle. Despite a few entertaining touches from Sam Raimi, this film is a dud – and a dismal sign for the future of the MCU.

The first Doctor Strange movie is one of the MCU’s low points, a formulaic origin story that fails to escape its orientalist roots. In that sense, there’s nowhere to go but up. An invitation to damn Doctor Strange 2 with the faintest possible praise.

Director Sam Raimi, a beloved figure, brings some much-needed personality in the form of playful PG-13 horror elements. But as Raimi himself has intimated, this is an MCU project rather than a Sam Raimi original. The Raimi-esque details garnish an ugly, poorly-characterized mess, rolling off the endless conveyor belt of Marvel spinoffs. Michael Waldron’s script is laden down by witless exposition, and the basic premise pales in comparison to Spider-Man: Into the Spider-Verse.

Continuing various threads from elsewhere in the MCU, Scarlet Witch is currently tormented with grief for her kids—a pair of characters she created by magic for a few episodes of WandaVision, and who are nowhere near as emotionally resonant as her husband Vision. (He’s barely even mentioned, suggesting that Paul Bettany is done with the franchise.) Repositioned as a villain, Wanda’s emotional breakdown puts the multiverse in peril, battling Strange and America Chavez across a series of alternate universes.

Given a massive budget to explore supposedly “mad” new settings, this film delivers painfully unimaginative material. There are a few fun moments like Wanda crawling demonically out of a mirror, or Strange and America falling through a cartoon dimension. Composer Danny Elfman adds some prog-rock flair to the score—a rare example of distinctive music in the MCU. But overall, Multiverse of Madness is oddly conservative in scope. The AU scenes are restricted to making superficial changes to New York City, and the cameos for other Marvel characters exist purely for novelty value. In the background of all this, the CGI situation is increasingly unpleasant to witness.

Over the past decade, Marvel Studios has come to rely on a specific brand of CG work, utilizing murky lighting and a limited color palette. Bland, impact-free action blends into a forgettable blur of computer-generated backgrounds. The ensemble battles of the Avengers movies look bafflingly incompetent compared to the visual dynamism of Disney’s other A-list franchise, Star Wars. In The Multiverse of Madness, we see some of the worst material to date.

As Cumberbatch and Gomez leap through magical portals and flee supposedly-deadly monsters, there’s no sense of threat or physicality to anything. You can easily picture the actors swinging around the green screen soundstage, waiting for someone to add the mortal peril in post-production. Also, the MCU still struggles to depict magic onscreen. Raimi and Waldron come up with a few innovative ways to explore Strange’s powers, including a scene where he uses musical notes as a weapon. However, most of the magic battles use the same method of having characters throw balls of light at each other, which gets old pretty fast. It’s particularly detrimental to Scarlet Witch, whose mind-control and illusion powers are mostly ignored.

After all the hype around Wandavision, Wanda’s role is a major downgrade. Repeating the same character arc we just saw on Disney+, she’s an all-powerful witch whose only desire is to be a suburban mom—and she’s willing to tear the world apart to achieve it. Once again, this hammers home the idea that she can’t be trusted with her own powers. A blatantly sexist trope that we’ve already seen play out in multiple X-Men movies about Jean Grey.

Even more disappointing is America Chavez, whose personality receives a near-total reboot. She’s still a Latina teenager with lesbian parents, with a familiar costume and similar powers to what we see in the comics. However, her toughness and confidence are gone, much like how the MCU turned Peter Parker into Tony Stark’s nervous fanboy. While Xochitl Gomez is perfectly likable in herself, America spends most of the film unable to use her powers, relying on Doctor Strange for protection and guidance. She’s wide-eyed and vulnerable, a Disneyfied characterization choice that also desexualizes her comic book role. The MCU took a cool, independent, queer Latina superhero, and sanded down all the hard edges that made her interesting.

Doctor Strange in the Multiverse of Madness bodes ill for the MCU’s multiverse era, where writer Michael Waldron is set to be a key creative force. Instead of character-focused storytelling (where Marvel’s earlier phases really excelled), we’re forced to endure overblown crossovers with no emotional or thematic depth. Structurally speaking, this movie is just a string of mediocre action scenes held together with expository dialogue about people searching for and/or utilizing mystical spellbooks.

Sam Raimi’s involvement may be the most dispiriting element of all. Looking back at the gonzo energy of The Evil Dead or the goofy melodrama of the Spider-Man trilogy, it’s glaringly obvious how much better his work is with real creative control.