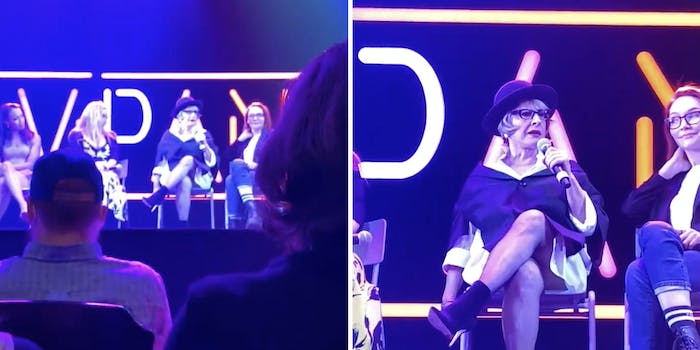 ‘Who do you think you are?’: Patti LuPone blasts Karen audience member who wouldn’t put her mask up during Broadway show

'After 2 years, it disgusts me that people still think they can disregard rules meant to prevent people from becoming ill and dying.'

Broadway’s strict mask policy—that you have to wear one in nearly every single place in the theater apart from a designated area to eat and drink—is still in place even after most theaters lifted their vaccine mandate. But after Tuesday night’s performance of Company at the Bernard J. Jacobs Theatre, a woman appeared to flout the policy, which led to one of the show’s stars calling her out from the stage.

In a 36-second video filmed by someone in the audience during a talkback—in which several members of the cast talk with the audience about the show— featuring Company’s female cast members, Patti LuPone, who plays Joanne in the show, directly addressed someone in the audience. Company’s COVID safety policy on its website states, “All guests must wear a properly fitting mask over the nose and mouth in the theatre except when eating or drinking in designated areas. Guests who do not comply with these policies will be denied entry or asked to leave the theatre.”

We don’t see the person LuPone is speaking to, but in directly addressing her, LuPone says that the woman wasn’t wearing her mask properly and that she had it resting under her nose.

“Put your mask over your nose,” LuPone says out of frame. “That’s why you’re in the theatre. That is the rule. If you don’t wanna follow the rule, get the fuck out! Who do you think you are if you do not respect the people that are sitting around you?”

Another angle of the incident showed the woman whom LuPone addressed sitting just a couple of rows away from the stage, but only the back of her head is visible.

As LuPone told the woman to fix her mask, the audience cheered.

“I pay your salary,” the woman said, appearing to suggest that ticket purchases directly fund LuPone’s paycheck. Amid boos, LuPone quickly responded, “You pay my salary? Bullshit. [Company producer] Chris Harper pays my salary. Who do you think you are? Just put your mask over your nose.”

The woman was kicked out of the theater, according to playwright Sarah Jae Leiber, who attended Tuesday’s show.

In a statement provided to the Daily Dot, Harper showed his support for LuPone and praised her efforts to help keep Company’s company safe.

“Over the course of her storied career, Patti has always had an unshakable bond with the audience, and she takes their role as seriously as her own,” Harper said. “She is also a fierce advocate for the entire theatrical workforce. We stand with Patti and support her efforts to keep our entire community—from patrons to ushers, cast to stage crew—safe and healthy so we can keep Broadway open.”

And online, people quickly praised LuPone and admonished the woman for attempting to disrespect a Broadway legend.

“After 2 years, it disgusts me that people still think they can disregard rules meant to prevent people from becoming ill and dying,” Twitter user @BearKosik observed.

“I just thought about some woman telling Patti LuPone “I pay your salary” and started laughing all over again. Yes, Karen, your $50 at TKTS goes far,” added @Anakela21.

Company, which opened at the end of 2021 after pandemic delays, has been nominated for nine Tony Awards including best revival of a musical and best performance by an actress in a featured role for LuPone.