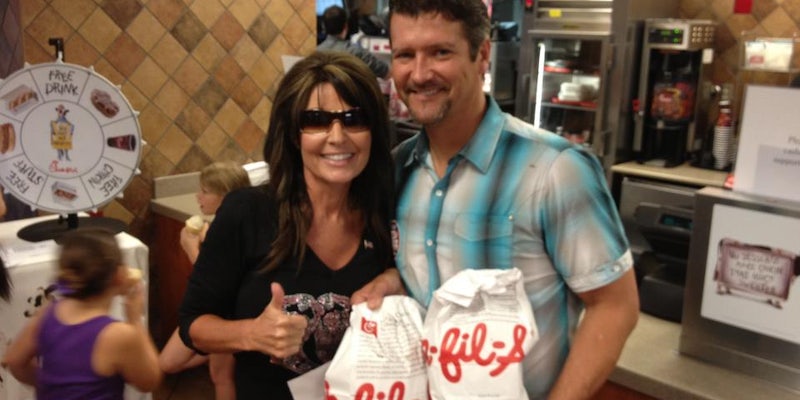 Why talk turkey when you can talk chicken?

You have to wonder if on any other day, the likes of Sarah Palin and Rick Santorum would actually eat at Chick-fil-A. I’d suspect not, but when a popular former conservative governor proposes a “Chick-fil-A Appreciation Day” on Facebook, it just happens, and social media becomes the place to brag about it.

That governor was former Arkansas Gov. Mike Huckabee, who proposed an appreciation day for the chicken chain after its chief executive, Dan Cathy, said he supported traditional marriage. The comment set off a firestorm of controversy, with people calling to boycott the establishment.

But conservatives rushed to support Chick-fil-A on Aug. 1, including Santorum and Palin. The latter even put a picture of her and her husband enjoying the meal on Facebook, a post that got a variety of responses.

“You can affiliate yourself with retrograde social prejudice and line your arteries with cholesterol at one stop,” wrote Jennifer Gustavson.

“Sarah, a great picture of you and Todd in Chick-fil-A; it should drive the left crazy,” wrote Daniel Brennan.

However, one of the bluntest posts of the day came from failed presidential candidate Santorum, who tweeted “Here at @citizensunited finishing our Chick-fil-A lunch. Ok leftists go crazy.”

The post was retweeted dozens of times and gained a handful of responses, including one from Mike HeXt, who wrote “@RickSantorum @CitizensUnited s’ok as long as its not the white house, ya crackpot!”

Santorum’s tweet was one of six posted throughout the day about Chick-fil-A, some even using #chickfila, a hashtag that gained almost 160,000 mentions in recent days, according to Topsy.com.

The pundit who talked about the event the most was Huckabee, although he took a much less aggressive stance. Throughout the day he posted pictures of long lines at Chick-fil-A and post that the appreciation day was more about free speech than marriage – “It’s not about fried chicken, it’s about free speech,” one post read – although considering Huckabee’s time as a Baptist minister, that may be up for debate.