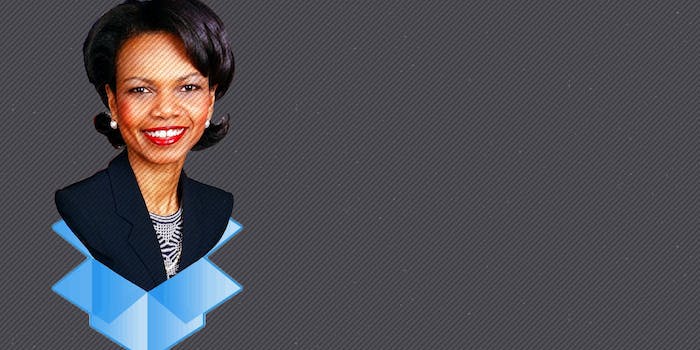 Condoleezza Rice, who served as the Secretary of State during the second half of the George W. Bush presidency, has joined the board of directors at Dropbox.

“As a country, we are having a great national conversation and debate about exactly how to manage privacy concerns,” Rice told Bloomberg Businessweek. “I look forward to helping Dropbox navigate it.”

Rice’s politically-charged history makes her a contentious choice that is angering many current Dropbox users. A newly created website called Drop Dropbox protests the appointment with a succinct list of reasons why people object to her new position: her involvement in the Iraq War, her endorsement of the Bush administration’s torture program and, importantly, her support for warrantless wiretaps.

here is the reason for #dropdropbox in a nutshell: to ME, Condoleeza Rice is a mass murderer http://t.co/q8TbA7apo5

Condoleeza Rice is responsible for many deaths and unethical deeds #dropdropbox

I don’t normally bore you with politics, but if Condoleezza Rice joins Dropbox, I’ll have to #DropDropbox (paid acct) http://t.co/mZnmA2dKgV

Commenters on the Dropbox blog post announcing Rice’s appointment have taken a firmly critical tone as well, with a slew of alleged subscribers promising to cancel their accounts: Politics aside, Rice’s appointment makes sense: she’s majorly connected, majorly smart, and she runs a consulting firm that focuses on Silicon Valley. Prior to her years in the Bush administration, Rice was on the board at Chevron, Hewlitt-Packard, and Transamerica Corporation. Chevron liked her so much they named a ship after her; Dropbox is surely hoping they’ll have just as positive an experience. Remeber, Dropbox wants business clients. Rice has corporate connections. Dropbox wants an advisor who knows about international regulations and policies. Rice is an expert.

All that said, one of Rice’s stances the Drop Dropbox campaign mentions is genuinely worrisome: Rice is a wiretapping superfan. Before she was Secretary of State, she was the National Security Advisor who endorsed the Patriot Act, and authorized NSA surveillance of the United Nations Security Council in the 2003 run-up to the Iraq War. Putting her on the Dropbox board to protect user privacy is akin to putting Edward Snowden in charge of protecting government secrets. Her past behavior gives every indication that she would support cooperating with government surveillance initiatives instead of resisting them or assessing them critically. It’s no wonder users are so upset.