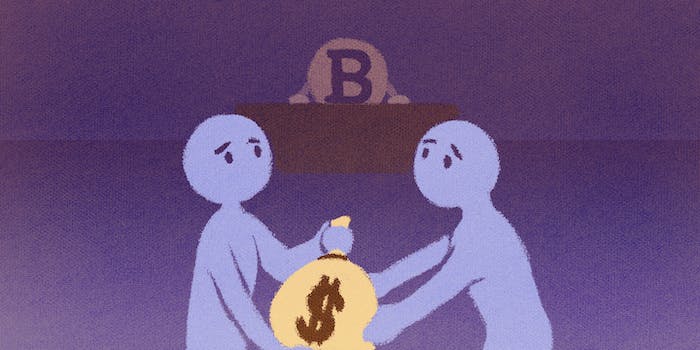 Bitcoin was supposed to be a currency beyond the control of financial institutions and, through strong cryptography, allow individuals to spend their money without being spied on.

That utopian dream may be over.

As large companies have formalized trade of the currency and governments have patched together regulations, the ideals of a purely independent Bitcoin are quickly being challenged. Now, it appears that Coinbase, one of the largest bitcoin wallet hosts, is monitoring its users who have been sending donations to a security researcher.

The saga started late last week, when a user took to the DarkNetMarkets Reddit community and uploaded a screenshot of an email that had allegedly been sent by Coinbase.

“As part of our compliance program, we are required to periodically review accounts,” it read. “We would really appreciate if you could help us complete this routine review by providing the following information.” The email then asked the user to describe the “primary use” for their Coinbase account as well as “the nature of your outgoing bitcoin transfers and what service(s)” they are related to.

This Coinbase email was allegedly sent very shortly after the user had donated some bitcoin to Gwern Branwen, a security researcher and moderator of the DarkNetMarkets subreddit.

Earlier this year, the Department of Homeland Security (DHS) sent a subpoena to Reddit, demanding the social network turn over personal data of five users of the DarkNetMarkets subreddit. Amongst those was Branwen, who regularly trawls through court documents and other information about the Dark Net markets and posts it onto Reddit for anyone to see. In a statement sent to Wired in March, Branwen speculated that the subpoena might have been in connection to the user NSWGreat, a former staff member of the now defunct Evolution black market.

It is in the shadow of this subpoena that the apparent monitoring by Coinbase has taken place.

Then, on Monday, it happened again. Another user took his findings to the subreddit after his Coinbase account was allegedly frozen shortly after he sent a donation to Branwen. Noticeably, the Bitcoin address the user donated to was not particularly active, according to Branwen, who commented on the thread: The wallet “was advertised only in one Reddit comment,” he wrote.

The Daily Dot could not confirm whether the two users who posted to Reddit were indeed two separate people.

In an emailed statement, a Coinbase spokesperson said, “We don’t comment on specific cases, however, Coinbase is required to monitor activity on its platform in accordance with the Bank Secrecy Act and other regulation governing all Money Service Businesses.”

Part of the intention of the Bank Secrecy Act is to counter money laundering, and requires U.S. businesses to hold identifying information on its customers.

Branwen says he does not know why Coinbase would be monitoring his Bitcoin donations.

“I don’t know any more about this than someone who’s read all the Reddit comments,” Branwen told the Daily Dot through Twitter. “My best guess is they think I’m either a market operator or a vendor [on the Dark Net]. My second guess is they want to monitor contacts with ops/vendors.”