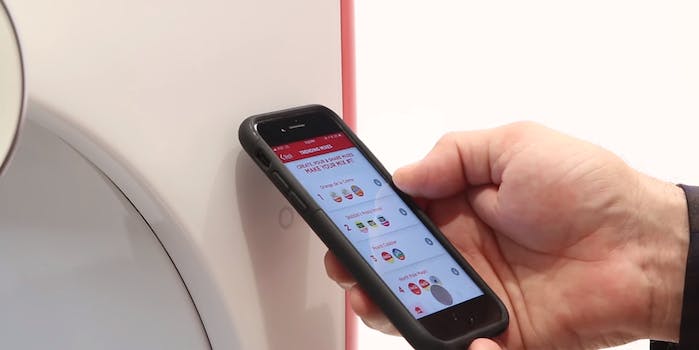 Coke machines are about to go high-tech.

Fans of Coca-Cola and of the dizzying pace of technological advancement in modern American life have something new to get excited about. Namely, the impending launch of the new Bluetooth-integrating Coca-Cola Freestyle 9100 machines, unveiled for the very first time at the National Restaurant Association’s big show in Chicago this weekend.

Anyone who’s ever sidled up to one of the tens of thousands of Coca-Cola Freestyle machines in the world already knows exactly what they’re all about. Unlike the older, classic soda machines of yesteryear, the Coca-Cola Freestyle machine boasts a massive amount of options of what drinks to purchase and is poured out into your cup fountain-style, rather than being distributed in cans.

[Initiating Big News Protocol]
Greetings humans! We are pleased to announce that the robo-stork is bringing us a new member of the Coca-Cola Freestyle family! Say “H3LL0” to the 9100: https://t.co/8QFUx61Ws7

These things first hit the market  in 2009, as Mashable notes, meaning the original run of machines are closing in on a decade of use. The new 9100 series is expected to be released in 2019, the ten-year anniversary.

And according to the company, they’ll be equipped with new technology that allows customers to look through and select their drink options on their smartphones, via Bluetooth connection.

Whether someone’s in the mood for a classic taste or wants to mix up something new, they’ll be able to handle it all via the app. This will probably make the drink-ordering experience at the local movie theater a little bit more fun, although it’ll also gives everyone one more reason to sweat how much battery life they have left.