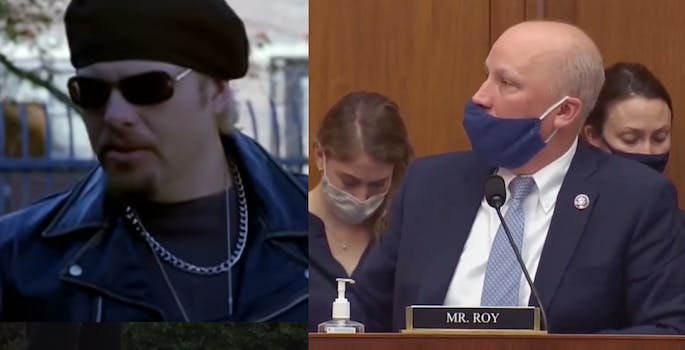 It's a Toby Keith song.

Rep. Chip Roy (R-Texas) is being criticized online right now for making pro-lynching comments during a House of Representatives hearing today about the shootings in Atlanta.

But he should also be taking heat for passing off a Toby Keith lyric as an ancient Texas shibboleth.

In saying that he wanted “justice” for the victims—while discussing other Republican talking points unrelated to yesterday’s shooting—Roy appears to have used lyrics from “Beer for my Horses” by Keith and Willie Nelson.

“The victims of race-based violence and their families deserve justice,” he said. “We believe in justice. There’s old sayings in Texas ‘Find all the rope in Texas and get a tall oak tree.’ We take justice every seriously, round up the bad guys, that’s what we believe.”

That is almost exactly word-for-word what Nelson croons in the song.

“Take all the rope in Texas, find a tall oak tree,” he sings.

Roy goes on to also quote another nearly identical lyric.

“Round up all them bad boys,” Nelson follows in the song, almost identical to what Roy says after his line about “rope.”

“Round up the bad guys,” Roy added.

The song is about justice, Roy’s main talking point, with Keith singing: “Justice is the one thing you should always find.”

So maybe it is an old, ancient saying. But it seems just as likely he was rocking out to Toby Keith before the hearing.

Update 1:51pm CT, March 19: In an interview with Dana Loesch, Roy copped to using that song lyrics, but added that it was a saying he grew up with in his family, who all came from law enforcement.

“I quoted a Willie Nelson and Toby Keith lyric that goes back to an old phrase I grew up hearing that’s kind of Wild West Texas justice,” he said.