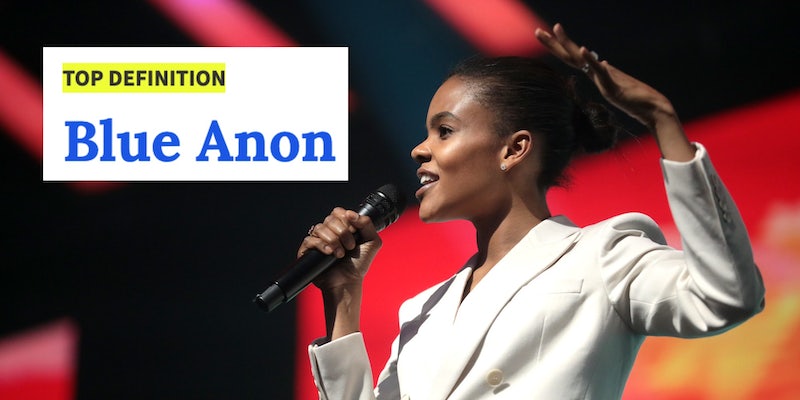 The term is being used by everyone from Candace Owens to Jack Posobiec.

If you’ve seen the term “Blue Anon” appear on social media over the past few days, you may be wondering what exactly the phrase is all about.

The phrase is intended to resemble “QAnon,” the debunked far-right conspiracy theory that claimed a clandestine team of military intelligence officers were secretly aiding former President Donald Trump in a secret battle against a global network of child-eating pedophiles.

Greene, one of QAnon’s most well-known proponents, has likewise attempted to use the phrase to deflect legitimate criticism on her own outlandish beliefs.

Malaysian-based conservative commentator Ian Miles Cheong also tried to shift attention away from QAnon by suggesting that its followers, who were a driving factor in the violent insurrection at the U.S. Capitol in January, were less concerning than Blue Anon.

“BlueAnon is getting worse than QAnon,” Cheong tweeted.

The term ultimately became a top trend on Twitter after an Urban Dictionary entry for the phrase was temporarily removed over the weekend without explanation, sending conservatives into a fervor online.

Conservatives accused Google of hiding references to Blue Anon from their search results as well.

After returning to Urban Dictionary on Monday, the newest entry for Blue Anon describes the term as a “loosely organized group of Democrat voters, politicians and media personalities who spread left-wing conspiracy theories such as the Russia hoax, Jussie Smollett hoax, Ukraine hoax, Covington kids hoax, and Brett Kavanaugh hoax.”

The post also goes on to suggest that “Blue Anon adherents” are incorrectly concerned about future violence in Washington, D.C. by the same conservatives who stormed the Capitol.

Jack Posobiec, another prominent conservative known for regularly spreading debunked claims, was also a major promoter of the term.

“We have members of the House, Senate, and Oval Office spreading dangerous Blue Anon conspiracy theories that amplify extremism,” Posobiec wrote. “This is not normal.”

Neither Urban Dictionary or Google have responded to accusations of censorship made by conservatives.