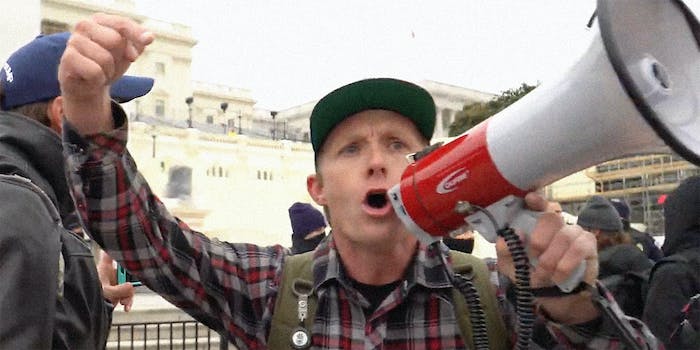 Sean McHugh was convicted of statutory rape of the teen when he was 23.

Federal authorities say that during the Capitol riot, Sean McHugh fought with and heckled police. According to charging documents, McHugh at one point shouted at the cops, “You guys like protecting pedophiles?”

This is put into new light by revelations from CNN that McHugh’s criminal record includes a charge of statutory rape of a 14-year-old. He pleaded no contest to the charge.

As the Daily Dot has previously reported, the mob that participated in the Capitol riot of Jan. 6 included many QAnon supporters. QAnon supporters are obsessed with pedophilia, as they believe that an international cabal of Satanists who rape and eat children controls the world.

It’s not known whether McHugh personally holds QAnon beliefs, although his accusation that pedophiles were inside the Capitol where Congress was to certify President Joe Biden’s win indicates that he might. QAnon believers are convinced that many politicians—primarily, though not exclusively, liberals—are in the cabal.

Several people pointed this out.

“You can set your watch by their projection,” quipped @TrumpTaxes.

McHugh was charged with unlawful sex with a minor in 2010. According to California court records, CNN reports, the teen was intoxicated at the time. McHugh was 23 years old.

After pleading no contest, he was sentenced to 240 days and four years probation, per CNN.

At the time of the Capitol riot, McHugh was on probation for convictions of driving under the influence and driving on a suspended license, the outlet adds.

McHugh is facing eight federal counts associated with his alleged role in the Capitol riot. He has not yet entered a plea in the case.