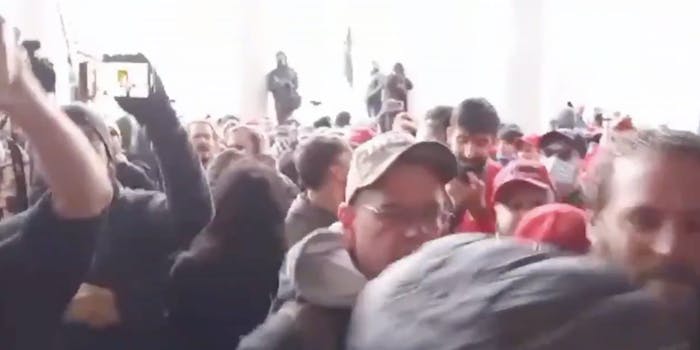 An actual gallows was also erected by Trump supporters outside.

Supporters of President Donald Trump were seen calling for the death of Vice President Mike Pence on Wednesday while storming the Capitol.

Footage of the moment, which came as rioters attempted to stop Congress from counting the Electoral College votes, is shedding new light on the intentions of those in attendance.

Trump supporters had been convinced for weeks that Pence would refuse to certify the Electoral College votes, a conspiracy theory that not only spread online but that was shared by the president himself.

In reality, Pence never had the authority to alter the outcome of the election. But the president’s base—stirred on by figures such as pro-Trump attorney Lin Wood, who repeatedly called for Pence to be killed by firing squad—believed that the vice president had committed an unforgivable betrayal.

The sentiment regarding Pence appears to have been widespread. Reuters photojournalist Jim Bourg also reported hearing numerous rioters calling for the vice president’s death while documenting the uprising.

“I heard at least 3 different rioters at the Capitol say that they hoped to find Vice President Mike Pence and execute him by hanging him from a Capitol Hill tree as a traitor,” Bourg tweeted. “It was a common line being repeated. Many more were just talking about how the VP should be executed.”

The remarks are even more troubling given that some rioters were seen with law enforcement-style flex-cuffs inside the Capitol, raising questions over whether they were attempting to take lawmakers hostage.

An actual gallows was also erected by Trump supporters outside, although it remains unclear whether the structure was merely symbolic.

The Capitol siege resulted in the deaths of five people, including a law enforcement officer who was reportedly bludgeoned to death with a fire extinguisher.

Despite the nationwide backlash to the actions on Wednesday, reports indicate that Trump supporters are actively planning to carry out more violence at the inauguration of President-elect Joe Biden on Jan. 20.