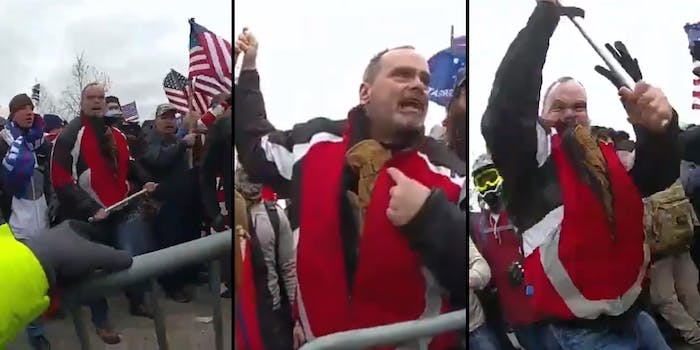 The defendant, a retired police officer himself, blames the cops.

A federal judge has ordered the release of new footage from the Capitol riot. The video from a police officer’s body camera shows the chaotic moments when the crowd pushed past the barricade and attacked the cops.

The footage is from the case against Thomas Webster, a retired New York Police Department officer. Webster is currently being held without bond on numerous federal charges, several associated with attacking police and other acts of violence on government property. He pled not guilty.

In the 44-second clip posted by Scott MacFarlane of NBC’s Washington, D.C. affiliate, a man identified as Webster shouts repeated expletives at police. An officer, while commanding the crowd to get back, puts their hand up as Webster, still yelling, approaches the barricade. Their hand makes contact with Webster’s chest and he backs up. It’s not clear if he was pushed.

Webster shouts at the cop to “take your shit off” multiple times and calls them “communist motherfuckers.” Then he shoves the metal barricade into police and swings a metal pole at the officer whose body camera captured the footage. The officer manages to wrest the pole from his hands just before the crowd pushes through the barricade and police appear overwhelmed.

Webster rushes towards the officer as the situation around them escalates significantly. As the video ends, the scene is chaos and the officer is on the ground surrounded by people attacking them.

Other still images from the court document show Webster on top of the officer. In one Webster can be seen digging his thumbs into the officer’s eyes.

In the months since, hundreds have been arrested for their alleged roles in the Capitol riot. Many are associated with far-right groups including the Proud Boys and Oath Keepers. Webster reportedly denies being affiliated with these groups.

Webster has petitioned the court for release pending trial. According to court records tweeted by MacFarlane, he also claims that officers provoked the crowd by mocking protesters who were complaining of excessive use of force.

He remains detained without bond.