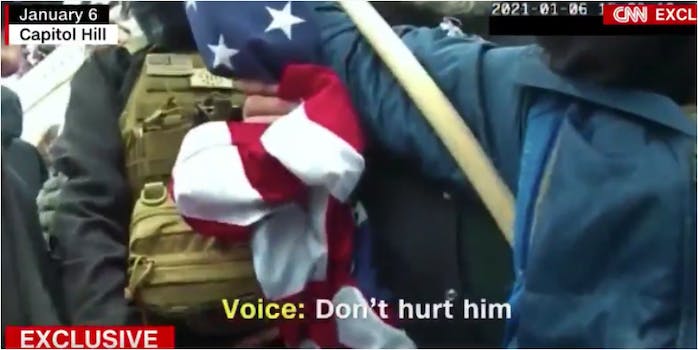 The footage was recently obtained by CNN.

New body camera footage from Capitol Police officer Michael Fanone shows him in midst of the Jan. 6 Capitol riot before losing consciousness as he was swarmed by the pro-former President Donald Trump crowd.

Fanone, 40, had been stun-gunned several times and beaten with a flag pole on the day Trump supporters stormed the Capitol. The video, acquired by CNN, shows one rioter yelling “got one,” while another tries to escort him to medical attention.

Fanone is heard saying “I have kids” in the video.

Fanone is screaming throughout the chaotic video before passing out in the hands of other officers inside the building.

Ultimately, Fanone suffered a heart attack and a concussion that day and is still fighting a brain injury and post-traumatic stress disorder, according to CNN.,

Fanone was among 850 other officers defending the Capitol that day. After it was over, five people died and 140 officers were injured.

“I experienced the most brutal, savage hand-to-hand combat of my entire life,” he told CNN last month.

The FBI has currently made 475 arrests related to the insurrection.

The new footage comes alongside House Republicans’ removal of Rep. Liz Cheney (R-Wy.) from her leadership position. Cheney has criticized Trump for spreading election disinformation which ultimately led to the insurrection.

Many Republicans still deny that the events that took place on Jan. 6 were an insurrection or even a violent riot.

Rep. Andrew S. Clyde (R-Ga.) recently said it was a “boldfaced lie” to describe Jan. 6 as an “insurrection.”

“I don’t know how you can watch my body-worn camera footage and deny that Jan. 6 was anything other than violent and brutal,” Fanone told CNN.