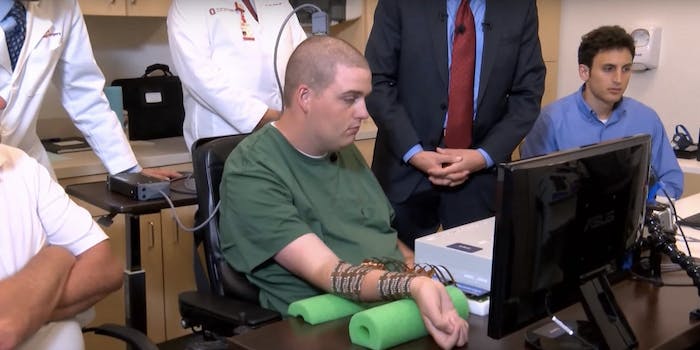 Brain hacking is real, and it’s given this paralyzed man the ability to move again

As you’re reading this sentence, hundreds of millions of neurons are firing in your brain, controlling your behavior and actions. The electrical impulses that occur in our bodies are responsible for our movements. When these neurons can’t communicate, the human body’s functionality is limited.

Ian Burkhart’s brain doesn’t properly communicate with his body. He was paralyzed in an accident that broke his neck over five years ago while swimming in the ocean with his friends. As a quadriplegic, living a fully independent life didn’t seem like a possibility, until revolutionary technology reprogrammed his brain, allowing him to reconnect his brain to his muscles and control the movement his arm.

Burkhart is the world’s first patient to use neural bypass technology. Ohio State University’s Wexner Medical Center and nonprofit science and technology development firm Battelle Memorial Institute, created a microchip that, when implanted in Burkhart’s brain, could make the neurons communicate once again.

At the SXSW festival on Saturday, Burkhart shared his story and technical transformation as an example of the potential for hacking the brain that could potentially help the 12,500 people who suffer a spinal cord injury each year.

“I knew when I had my accident, I said to my mom, ‘I’m glad I’m 19 and not 54 because the way science and technology are progressing, there’s certainly going to be something in my lifetime, and I will be able to benefit from it,” he said.

Neural bypass technology is still in early phases of development, and while Burkhart doesn’t directly benefit from it in his home, he is paving the way for this technology to help himself and others become more independent in the future.

In the frontal lobe of our brains is something called the motor cortex, the part that controls movement. Scientists needed to identify the correct area of Burkhart’s motor cortex that controls his hand movements, and inserted a microchip the size of a pencil eraser to collect and monitor the electrical activity in his brain.

“The idea was that you can take signals from the brain, directly decode them, figure out what someone like Ian is thinking about, and re-encode them or translate them, and inject them back into muscles,” said Nick Annetta, electrical engineer at Battelle.

The electrode in Burkhart’s brain is connected to a pedestal that discreetly sticks out at the top of his head. When it’s hooked up to a computer, it picks up signals darting around, and a computer applies algorithms to decode the data. It then translates them and sends them to muscles, controlled by an electrical current on a sleeve encasing his forearm. To move his arm, he simply has to think about it.

Engineers take data off the chip at about one gigabyte every three minutes. The computer is consistently running a machine learning algorithm to try and decipher that data, or figure out which electrical patterns it’s analyzing from the chip coincide with moving his arm.

Burkhart and the team of researchers and doctors have worked on this project for two years. He meets with the team three times a week in sessions lasting 3.5 hours. It’s a tremendous commitment to an investigative piece of equipment, but it could one day change lives for millions of people.

Eventually, Annetta said, neural bypass technology will just be one step in the rehabilitation process; science will progress enough to give paralyzed individuals their function back. For now, though, it’s an experimental technology that has truly changed one man’s brain, and his life.