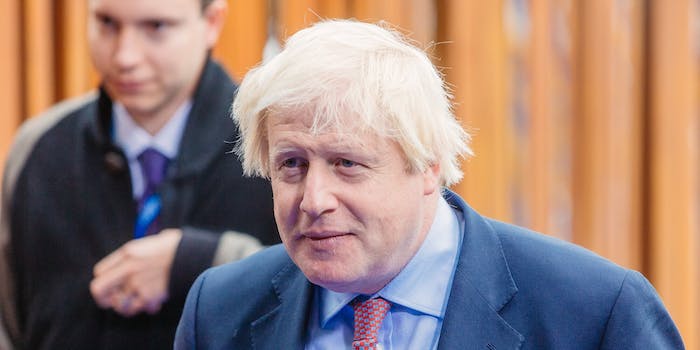 This means he has probably been working while infected for at least a week.

U.K. Prime Minister Boris Johnson is now in self-isolation after testing positive for COVID-19, a.k.a. the novel coronavirus.

Johnson shared the news in a Twitter video, saying that he began to show “mild symptoms” over the past 24 hours, and will continue to lead the government via video conference. He is the second world leader to go into self-isolation, with Canadian Prime Minister Justin Trudeau self-isolating after his wife tested positive on March 12.

Johnson is facing widespread criticism for the U.K. government’s slow response to COVID-19, which began with a theory that herd immunity could be achieved by exposing large numbers of the population to the virus. Over the last two weeks, Johnson and his advisors evolved their position to something more in line with other European countries, ordering a nationwide lockdown.

According to the U.K. government’s own medical advice, “Fourteen days is the incubation period for coronavirus,” which is why people are advised to self-isolate for two weeks if they believe they’ve been exposed. Some people never show symptoms despite being infected, while others remain asymptomatic for up to 14 days before they develop a fever or cough. Symptoms generally begin five or six days after infection, but in rare cases, the incubation period can last as long as 27 days. In other words, it’s highly likely that Johnson has been infected for at least a week while going about his daily business, including parliamentary meetings and interacting with his pregnant fiancée.

Three weeks ago, Johnson confidently downplayed the crisis by saying he was still shaking hands “with everybody,” in a press conference that’s now being shared widely on British social media. On March 11, Johnson stated that he would not be tested for COVID-19 despite one of his ministers testing positive, just days after that minister attended a reception with Johnson and his fiancée. The U.K. parliament is still holding in-person sessions in the House of Commons, and (judging by this crowded meeting on March 18) only started following social distancing guidelines this week.